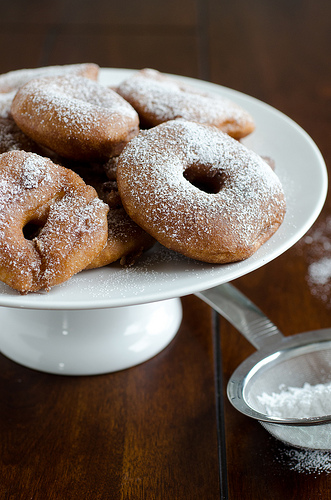 Whenever I tell someone that I grew up in West Michigan, they always say "Well, you don't look Dutch!"  Maybe that's because...I'm not!  Just because I grew up "near" Dutch Village and an hour outside of Holland, Michigan, doesn't mean I'm Dutch or Christian Reformed.  But, that seems to always be the assumption when meeting someone new who is familiar with that side of the state.  I swear they even look at my feet to see if I'm wearing wooden shoes.

Don't let me confuse you now that I'm sharing a Dutch recipe with you today.  I'm still not Dutch, people.  I'm Irish/Italian, with a little bit of Blackfeet Indian, German and whatever else.  Okay, maybe there is some Dutch in there somewhere that I don't even know about.  😉 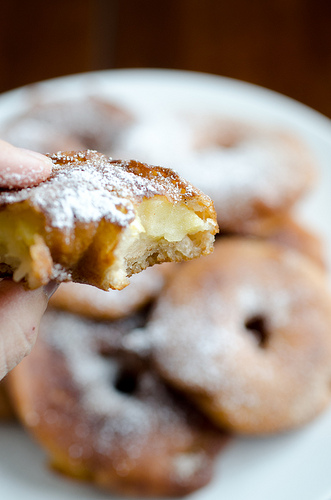 Can we just agree that you should go ahead and try making these apple fritters even if you aren't of Dutch heritage?  I mean, these puffy pillows of fried apple rings that are generously dusted with powdered sugar and cinnamon need to make their way into your mouths.  Just think of the possibilities... post trick-or-treating dessert, Thanksgiving brunch, Christmas Eve breakfast?  Or, better yet, go Dutch and serve as a New Years tradition. 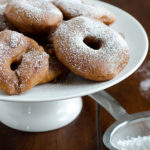 *Domino sells superfine sugar, but if you can't find it in your local grocery store, you can easily make it by grinding granulated sugar in your food processor.