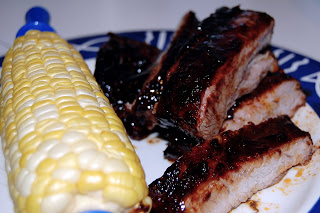 Taken from Rachael Ray's magazine "Everyday with Rachael Ray" June/July 2006. I'm not too informed about ribs, but I'm pretty sure I didn't use baby back ribs when I made this tonight. The sauce is delicious. It was Ben's favorite part. The meat was good, too, but could've been more tender. I halved the recipe and only cooked about 3 lb meat instead since it is just the two of us. Then, I shouldn't admit it, but I cheated and made instant mashed potatoes from a package. Hey, if you're gonna go that route, I found a brand that tastes delish! It's called Idahoan and the flavor I bought is Buttery Homestyle. Good stuff if you're not doing the real deal!

1. Arrange the oven racks in the upper and lower thirds of the oven and preheat the oven to 375 degrees F. Line 2 baking sheets with foil and arrange the rib racks, meaty side up.

3. In a small saucepan, combine the jam, ketchup, steak sauce and vinegar. Cook over medium heat, stirring often, until the glaze comes to a boil, about 5 minutes. Remove from the heat and stir in the hot sauce.

4. Preheat the broiler. Pour off any melted fat from the baking sheets to prevent flare-ups. Brush the glaze on the ribs and broil 6 to 8 inches from the heat source until crisp, about 2 minutes. Slice the racks into individual ribs.