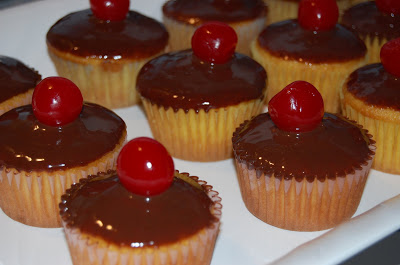 We had game night Tuesday night, and I promised to make dessert. Since our friends were in town all weekend and left Monday morning, I was extremely exhausted and didnt’ really have time to make anything too difficult or involved.

One of the blogs I frequent, Annie’s Eats, usually has some pretty quick and easy recipes that look impressive. So, I found myself scrolling through her recipes and found the perfect match! These Boston Cream Pie Cupcakes!

Why were they a perfect match? Well, because I had most of the ingredients on hand, it is an easy recipe, AND I had leftover homemade custard in the fridge from the danishes I made a few days before!

Well, I already had plans to go to my friend’s studio apartment and watch the finale of the Bachelorette with the gals. Oooooh… and don’t get me started on Deanna’s final decision (for those of you that watched)!! Anyway, I brought the cake mix with me and baked the cupcakes during the show so that all I would have to do Tuesday night is fill and frost the cupcakes between the time I got home from work and the time our guests arrived. Worked out perfectly!

Below is the original recipe, which I believe Annie got from Joelen’s food blog. It calls for a ganache (which I used a recipe from AllRecipes) but you can also use melted chocolate frosting. I also used a different custard filling since I had one homemade and ready to go. Next time I’ll try the custard recipe included. 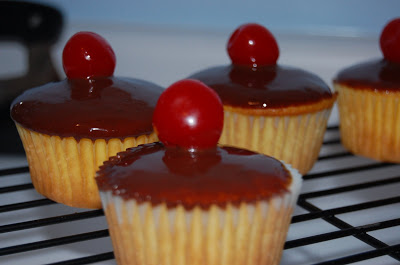 1 cup half and half

In the meantime, prepare the vanilla custard filling by combining the instant pudding mix the half and half in a medium bowl.In a stand mixer using the whip attachment, combine cream, vanilla and powdered sugar and whip at medium speed until soft peaks form.Gently fold in the pudding mixture to the whipped cream until it is fully incorporated and smooth.Place filling into a pastry bag fitted with a #21 (or standard star) tip.

When the cupcakes have cooled, place the tip of the pastry bag inside each cupcake and pipe in filling, being careful not to overfill.

When all the cupcakes have been filled, prepare your ganache.Dip the tops of the cupcakes in the ganache.Place glazed cupcakes on a cooling rack to dry.

Drain and pat dry maraschino cherries.While the cupcakes are slightly “wet” from the glaze, place a cherry on top for garnish.

We’re the Gladd family!
Gather around as we experience joy and community at the table! END_OF_DOCUMENT_TOKEN_TO_BE_REPLACED