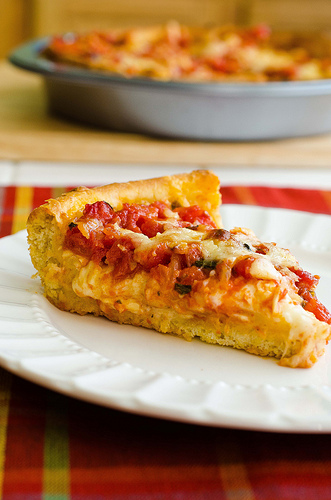 Six months ago we listened to God's calling for a ministry position and moved across the country, far away from our beloved city of Chicago.  Since then, we have missed many friends, family, landmarks and (more or less importantly) certain foods!  Chicago-style pizza is on the top of this list.

Yesterday, we were excited to root our Chicago Bears on to victory in the NFC conference championship, hoping to see them again in two weeks at the Super Bowl.  Unfortunately, the big V fell in the laps of a certain Wisconsin cheese-head team, but this didn't change the fact that there was a big win in my kitchen with homemade Chicago-style pizza! 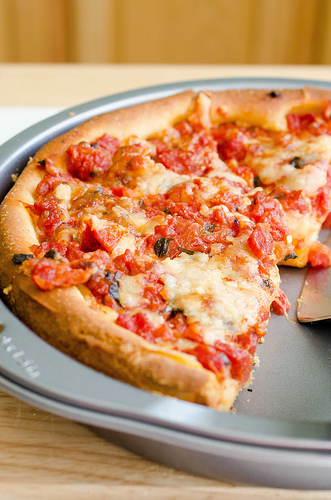 In Chicago, you primarily find two kinds of pie battling to be THE "Chicago-style" pizza.  Talk to a person who grew up in one side of Chicago and they will tell you that "Chicago-style" pizza is stuffed pizza, which has two layers of crust.  The popular chains Giordano's and Nancy's are known for this type of pizza.  Talk to another Chicagoan who is from the opposite end of town and they beg to differ, claiming deep dish is the authentic Chicago-style pizza, such as what is served at Pizzeria Uno and Lou Malnati's.  I love both equally, but this weekend I made deep dish for my first attempt at homemade Chicago-style pizza.  Plus, I've been told Pizzeria Uno is the original by more than one person, so I'm leaning towards deep dish claiming the title.

This pizza was spot-on, delicious!  The crust was even better than at the restaurants, and the sauce was so perfectly reminiscent of the chunky tangy tomato sauces we enjoyed back in the Midwest.  Don't even get me started on the ooey gooey yummy cheese!  Just after my first bite, I knew I would be making this even more often than we ever ordered it as take-out back home. 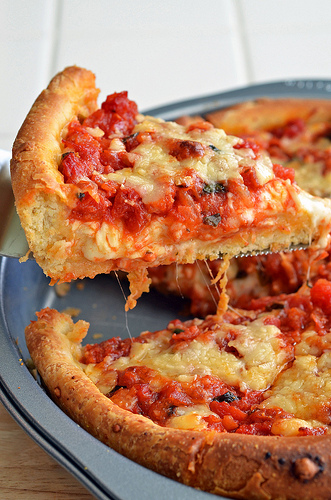 The dough recipe uses a method called "laminate", which means pressing together alternating layers of butter and dough.  Typically, you roll out the dough, spread butter on top, then fold the dough on top of each other and repeat.  This method is found in many pastry recipes, giving the dough a flaky/puffy, yet crispy texture.  For this pizza dough, the steps were a little different than I'm used to when laminating for pastries, but it turned out a wonderfully flaky crust.  Do not let the laminating step shy you away!  It is much more simple than it sounds.

Originally, I was not going to share this recipe with you today.  But, after multiple requests from many of my Facebook friends, I decided to move it up in the schedule so you can soon make this at home and taste a piece of heaven.  🙂

To make the dough:
Whisk together the flour, cornmeal, salt, sugar and yeast in the bowl of a stand mixer, until well blended.  Attach the dough hook and mix in the water and melted butter on low speed for 1 to 2 minutes.  Scrape the sides and bottom of the bowl as needed.  Increase the speed to medium-low and knead until the dough is glossy and smooth, about 3 to 4 minutes.

Coat a medium bowl with 1 teaspoon of the olive oil.  Transfer the dough to the bowl, turning once to coat with oil.  Cover tightly with plastic wrap and let rise at room temperature until nearly doubled, about 45 to 60 minutes.

Once dough is risen, turn it out onto a dry work surface and roll into an 8- x 6-inch rectangle.  To laminate the dough, spread the softened butter over the surface, leaving a ½-inch border around the edge.  Starting at the short end, roll the dough into a tight cylinder.  With the seam side down, flatten the cylinder into a 9- x 2-inch rectangle, then fold into thirds like a business letter.  Pinch the seams to form a ball, and return to the oiled bowl.  Cover tightly again with plastic wrap and let rise in the refrigerator for 40 to 50 minutes.  (Mine did not double in size, but it rose to about size and a half.)

Meanwhile, prepare the sauce:
In a medium saucepan, melt the butter over medium heat.  Stir in the onion, oregano and salt.  Saute until the liquid has nearly evaporated and the onion is golden brown, stirring often, about 3 to 5 minutes.  Add the garlic and cook just until fragrant, about 30 seconds.  Stir in the tomatoes and sugar, then increase the heat to medium-high.  Bring the mixture just to a boil, then lower the heat to medium-low and continue to simmer until reduced to about 1 ¼ cups, about 15 minutes.  Remove from heat and stir in the basil and oil.  Season with salt and pepper to taste.

Assemble and top the pizza:
Preheat oven to 425˚F.  Coat a 9-inch round cake pan with olive oil.  Move the dough to a dry work surface and roll out into a 13-inch disk about ¼-inch thick.  Carefully transfer the dough to the pan and lightly press to line the bottom of the pan and 1 inch up the sides.  If the dough resists stretching, wait 5 minutes before trying again.

Sprinkle the shredded Mozzarella over the surface of the dough, then layer the sauce over the cheese.  Top with Parmesan and bake for 20 to 25 minutes, until crust is golden brown.  Let rest for 10 minutes before slicing.

Recipe Note: This recipe is for one 9-inch deep dish pizza, whereas the original is for two.  I altered some of the steps as I found I didn't need as much time for kneading the dough, cooking the sauce, or baking the pizza.  These changes are reflected in my version above.  If you double this recipe, your times may increase significantly for cooking the sauce, and slightly for kneading and baking.

To Make Ahead: Prepare the dough up until the time of baking.  Store in fridge overnight, or freeze and thaw in fridge.  When ready to bake, place pan in oven while preheating so that it warms up slowly.  Once oven is preheated to 425˚F, bake for 20 more minutes, until crust is golden brown.

(This month we are giving back to the King family.  Visit Pennies on a Platter from January 1st to 31st to increase the blog hits which will in turn raise more money for Veronica and her children.  Please read this post for more information. You may also make a monetary donation by clicking on the PayPal button in the left hand column above.)