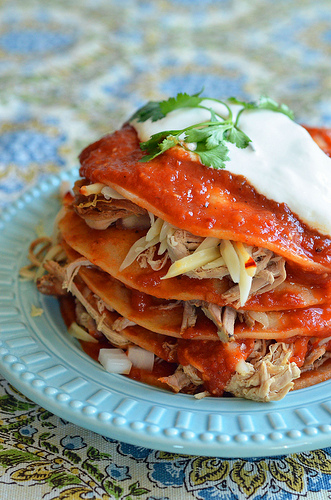 Now that I live in Southern California, I’ve been diving into the world of Mexican food.  I’ve shared with you before that I’ve never been a fan, until recently.  Ben is partially responsible for my conversion, but I think the other reason is because I’ve finally been exposed to good Mexican food.  Through-out my childhood and up until I got married, I always related Mexican food to places like Taco Bell.

It’s even strange for me to think about how much I like all of it now.  In the past, I would never choose to go to a Mexican restaurant.  If you saw me there, it was solely because I was invited.  Sometimes I now even crave to go, and even dare to try different items on the menu. I’m still working on the whole beans thing, but within the past several months I’ve tried friends’ homemade versions and really liked them!

Ironically, now that I love Mexican food, I am sort of a wimp with spicy dishes.  I’ve always been able to “hold my own” on the spicy levels, up until I had a baby.  I always heard pregnancies could do weird things to you, like make your feet grow and mess with your hormones.  But, I didn’t expect to lose my grit to handling heat in food.  This enchilada dish is very spicy, so I listened to the original recipe’s suggestion to cut down on the chipotle peppers and added an additional can of tomato sauce.  These alterations are reflected below. 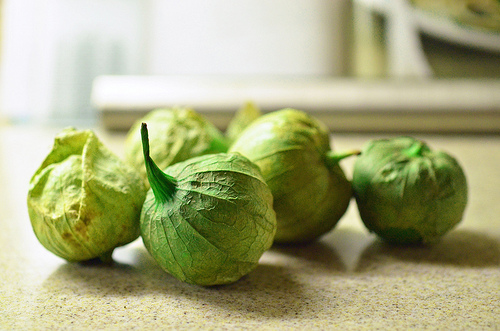 This was my first time working with tomatillos, which are small green tomatoes, about 1- to 2-inches wide.  While they are a staple in Mexican cuisine, you can find them widely available in your grocery store, with a papery outer skin.  Don’t be intimidated.  Just peel off the skin, wash, and they’re ready to use.

I love plating these enchiladas stacked in individual servings, as pictured above.  It’s such a beautiful presentation.  Having said that, if you’re serving more than four people, I would suggest using the oven method instead to cut down on time. This also makes more than enough enchilada sauce than you need.  Freeze the rest for later use, or serve along side with your dinner.

To make the shredded pork:
Place the pork tenderloin and bay leaf in a large slow cooker.  Pour the beer or Dr. Pepper over the meat.  Cover and cook on low until the pork shreds easily; about 6 to 8 hours.  Discard the bay leaf.  Transfer the pork to a cutting surface and shred the meat.  Cover with foil to keep warm and set aside until ready to assemble the enchiladas.

To make the sauce:
Adjust your oven rack to the top of the oven.  Arrange the roma tomatoes and tomatillos in a single layer on a baking sheet.  Broil the tomatoes until softened, about 20 minutes, turning halfway through.  They will shrivel and shrink.  Remove any blackened skin and discard.

Heat the olive oil in a large skillet until glossy.  Pour the tomato puree into the skillet and stir.  Season with salt, to taste.  If the sauce is too thick, add a little water until desired consistency is reached, making sure to add more salt as needed.

To assemble the enchiladas:
In a large skillet, heat the canola oil until hot.  Fry the tortillas until softened.  Drain on paper towels.  Dip one fried tortilla at a time in the pot of red sauce, turning to coat both sides.  Place one each on individual serving plates, then layer each with shredded pork, shredded cheese, and diced onions.  Repeat layering until each serving is stacked three to four tortillas.  (End with a sauce-coated tortilla on top, covered with shredded cheese and a dollop of sour cream.

Oven-Method:
Preheat oven to 350˚F.  Spread 1 cup of the sauce in an ungreased 9-x 13-inch baking dish.  Fry tortillas until softened; drain on paper towels.  Fill each tortilla with shredded pork, cheese and diced onion.  Roll and place seam side down into the pan, side-by-side in a single layer.  Pour 2 cups of the sauce over the enchiladas, then sprinkle with more cheese.  Bake until warm and cheese is melted, about 15 minutes.  Garnish with a dollop of sour cream or crema.

We’re the Gladd family!
Gather around as we experience joy and community at the table! END_OF_DOCUMENT_TOKEN_TO_BE_REPLACED