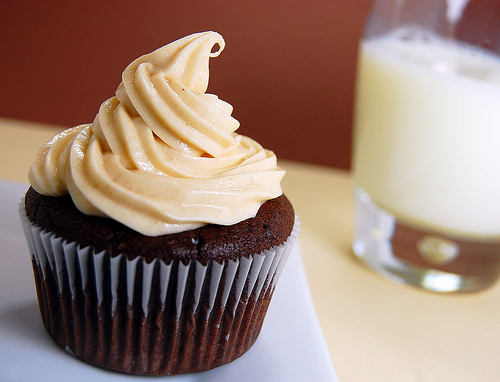 Wow... these cupcakes really are unforgettable, but somehow they managed to slip my mind. It wasn't until I was grazing through my iPhoto that I scrolled past the pictures of these.  I had to scroll back again, then searched through my blog and couldn't believe I never shared this recipe with you!

I made these near the end of last year for a coworker friend of mine who was leaving the company.  Since she was a chocolate lover, we decided to do a chocolate buffet on her last day.  This was one of the treats I contributed to the buffet. 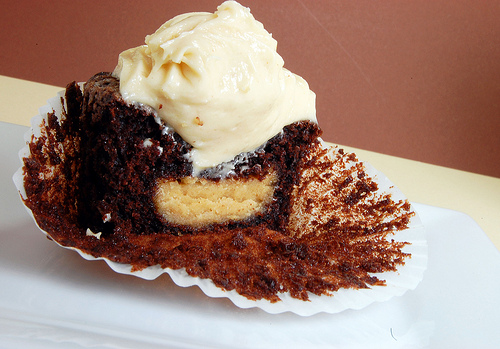 If you are a chocolate and peanut butter combination fan, you will love these cupcakes!  The peanut butter frosting is a dangerous delight, as you will be tempted to lick the entire bowl of frosting and leave none for topping the cupcakes.  Personally, I'm also at risk of eating the entire peanut butter filling without leaving any for the cupcake centers!  In other words, you must practice self control when making these!  🙂

Another word of warning... grab a big cup of cold milk when indulging as these are very rich.  Somehow I still manage to eat a couple at a time!

For the filling, mix the powdered sugar, peanut butter, butter and vanilla in a bowl. Using an electric mixer, beat at medium speed until fully combined. With your hands, roll the mixture into 1-inch balls, creating at least 24 count.  Set aside on wax paper or a baking sheet.

For the cake, stir together the sour cream, milk and vanilla extract in a small bowl.   In another medium bowl, whisk together the flour, cocoa powder, baking soda and salt; set aside.  In the bowl of a stand mixer fitted with the paddle attachment, cream the butter and sugar. Beat on medium-high speed until light and fluffy, about 2 minutes.  Beating one at a time, mix in the eggs.  Scrape down the bowl.  Mixing at low speed, alternately add the dry ingredients and the sour cream mixture, starting and ending with the dry ingredients. Mix until just combined.

Spoon or pipe a tablespoon or two of the batter into each cupcake liner. Drop a peanut butter ball into each cupcake well and top with the remaining cake batter. Bake for 18 to 22 minutes, or until passes toothpick test. Cool in the pan for 5 to 10 minutes, then transfer to a wire rack to cool completely.

Meanwhile, make the frosting.  Using the paddle attachment of the electric mixer, combine the cream cheese, butter and peanut butter until smooth.  Slowly mix in the powdered sugar. Blend until smooth. Gently fold in the whipped topping until fluffy. Frost cooled cupcakes as desired.