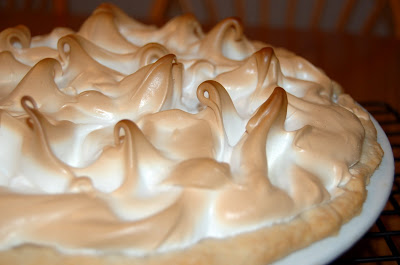 This was my first month as a Daring Baker. I’ve been reading their blog for months now and finally built up the courage to join and take on the challenge! I’m hoping to learn a lot about baking while in this group.

January’s challenge was Lemon Meringue Pie. For those who are not familiar with the Daring Bakers, each month a recipe is posted and kept secret by the members of the Daring Bakers. We must then conquer the recipe sometime during the month and then post it on the designated day. So, today is the day we all are posting our Lemon Meringue pies. Thanks to Jen (Canadian Baker) for the recipe idea. 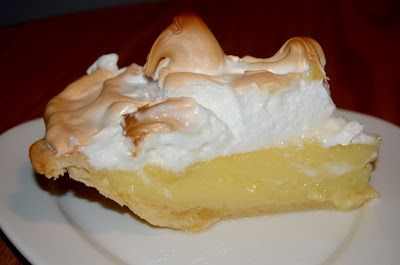 I made the pie the first weekend of January, so I’ve been dying to post my photos! It turned out awesome and I’ll probably make it (or some recipe of lemon meringue pie) again. Our friends, Brian and Tiana, along with my husband were the “lab rats” for me as usual. They all seemed to really like it. There is a very strong lemon taste to this pie, and it turned out a little watery as other Daring Bakers also commented. But, it was wonderful all in all.

When I was shopping at the store looking for Cream of Tartar, I had to call my mom and ask where the heck I could find it in the store. She told me the spice aisle. So, to the spice aisle I went and stood in front of that intimidating huge wall of spices and could not focus my eyes on Cream of Tartar. Finally, a very nice lady helped me find it. If you do not know what it looks like, it’s a white powdery looking substance packaged in a small spice jar. Maybe I’m the only one in the baking world that didn’t know what it was… embarrassingly enough I was initially looking in the soup aisle… such as Cream of Mushroom… yikes.

I was excited about the dough because I finally learned how to flute the edges and make it pretty! But, was I ever bummed when I took the crust out of the oven and the fluted edges did not stay. Good thing I took a picture before baking the crust! 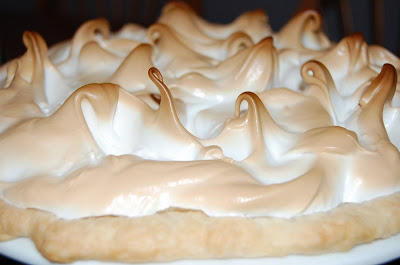 The meringue was a lot of fun. I spiked it with a fork and baked it until the tips were golden as you can see in the photo. You do not have to spike it. Some people pipe it, some just spread it on top, it’s up to you.

Check out everyone else’s pies on the Daring Bakers blogroll.

To Make the Crust:
Make sure all ingredients are as cold as possible. Using a food processor or pastry cutter and a large bowl, combine the butter, flour, sugar and salt.Process or cut in until the mixture resembles coarse meal and begins to clump together. Sprinkle with water, let rest 30 seconds and then either process very briefly or cut in with about 15 strokes of the pastry cutter, just until the dough begins to stick together and come away from the sides of the bowl.

Turn onto a lightly floured work surface and press together to form a disk. Wrap in plastic and chill for at least 20 minutes.Allow the dough to warm slightly to room temperature if it is too hard to roll. On a lightly floured board (or countertop) roll the disk to a thickness of 1/8 inch (.3 cm). Cut a circle about 2 inches (5 cm) larger than the pie plate and transfer the pastry into the plate by folding it in half or by rolling it onto the rolling pin. Turn the pastry under, leaving an edge that hangs over the plate about 1/2 inch (1.2 cm). Flute decoratively. Chill for 30 minutes.

Preheat oven to 350ºF (180ºC). Line the crust with foil and fill with metal pie weights or dried beans. Bake for 20 to 25 minutes. Carefully remove the foil and continue baking for 10 to 15 minutes, until golden. Cool completely before filling.

To Make the Filling:
Bring the water to a boil in a large, heavy saucepan. Remove from the heat and let rest 5 minutes. Whisk the sugar and cornstarch together. Add the mixture gradually to the hot water, whisking until completely incorporated. Return to the heat and cook over medium heat, whisking constantly until the mixture comes to a boil. The mixture will be very thick.

Add about 1 cup (240 mL) of the hot mixture to the beaten egg yolks, whisking until smooth. Whisking vigorously, add the warmed yolks to the pot and continue cooking, stirring constantly, until mixture comes to a boil. Remove from the heat and stir in butter until incorporated. Add the lemon juice, zest and vanilla, stirring until combined. Pour into the prepared crust. Cover with plastic wrap to prevent a skin from forming on the surface, and cool to room temperature.

To Make the Meringue:
Preheat the oven to 375ºF (190ºC). Using an electric mixer beat the egg whites with the cream of tartar, salt and vanilla extract until soft peaks form. Add the sugar gradually, beating until it forms stiff, glossy peaks. Pile onto the cooled pie, bringing the meringue all the way over to the edge of the crust to seal it completely. Bake for 15 to 20 minutes, or until golden. Cool on a rack. Serve within 6 hours to avoid a soggy crust.

Free-Style Lemon Tartlets(from “Ripe for Dessert” by David Lebovitz)
Prepare the recipe as above but complete the following steps:To roll out tartlet dough, slice the dough into 6 pieces. On lightly floured surface, roll each circle of dough into a 5 inch disk. Stack the disks, separated by pieces of plastic wrap, on a plate, and refrigerate for 30 minutes.To bake the dough, position rack in oven to the centre of oven and preheat to 350ºF (180ºC). Place the disks of dough, evenly spaced, on a baking sheet and bake for 20 to 25 minutes, until golden brown. Cool completely.

To finish tartlets, first place oven rack in the upper third of the oven and increase heat to 425ºF. Divide the lemon filling equally among the disks, mounding it in the centre and leaving a 1-inch border all the way around. Spoon the meringue decoratively over each tartlet, right to the edges, in dramatic swirling peaks.Return tartlets to oven and bake for about 5 minutes, until the meringue is golden brown.

We’re the Gladd family!
Gather around as we experience joy and community at the table! END_OF_DOCUMENT_TOKEN_TO_BE_REPLACED