You are here: Home / Uncategorized / Dinner with the VanVoorhis’

Last night our good friends, Aaron and Emily, came over for dinner. They live in California and are in town until Monday visiting family for the holidays. It was so fun to see them again and just eat, relax, and hang out. We played a few games of Sequence (a board/card game we got for Christmas) and I think Aaron may have been on a sugar high from the dessert because he kept skipping turns! 🙂

Since I met Aaron and Emily while we all lived in Nashville for college, I decided to do a Southern theme for dinner. I left out the Sweet Tea, though, because Emily doesn’t really like tea and instead served a concoction of Verners and White Grape Juice to make a sparkling punch. The trick to making this drink look nice in the pitcher is to serve it with frozen grapes and frozen sliced limes instead of ice. I got this idea at a wedding I attended last October… Such a simple way to dress up the table! (I’ve included a picture of the pitcher at the wedding which is similar to what I served last night). 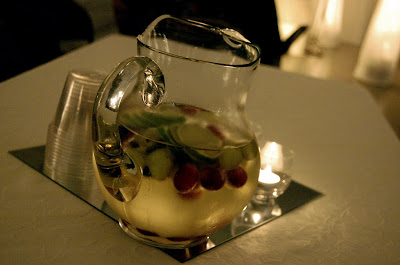 This will be one of the few times I’ve posted multiple recipes in one day, but I figured if I don’t post them all today, then I might get too behind because I already have a few waiting. Emily also has a food blog, so she was helpful in reminding me to take photos before consumption. In order to preserve the labels and organization of finding my recipes, I will add all of the recipes as their own posting, but will link to them in this posting. Just click on each title to get the recipe.

The rest of the menu included:

Pimientos (or Pimentos) are large, sweet, heart-shaped peppers that are typically used for canning. They are found in Spanish green olives to balance out the bitter taste of the olive. Pimiento cheese is a Southern staple often found on crackers or vegetables. Unfortunately, I was so busy getting the rest of dinner ready, that I never had time to taste this dip. Ben said he liked it, but didn’t love it, so not sure I’ll make it again. There are leftovers in the fridge, so I’m sure I’ll get a taste of it sometime today. I found this recipe in my February 2007 edition of Food and Wine. 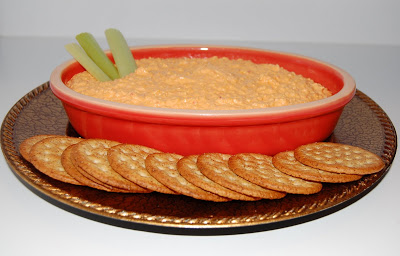 Mmmmmm….I love brisket, but never made it until now! If you asked me what is the one thing I am shy about making, I would tell you meat. There was ONE time that I really messed up a roast I was trying to make (a few years ago before I was even interested in cooking) and that one time has really scarred me for some reason! But, after this great experience with brisket, I don’t think I’ll be as hesitant anymore. The recipe is from my Better Homes and Gardens cook book, which is the first cook book I ever had. The meat is cooked with a juice made up of onion, chili powder, red pepper, worcestershire, garlic and a few other spices…and we used Famous Dave’s Rich & Sassy BBQ sauce to top it off.

I’m not including a recipe for the sweet potatoes since I didn’t do anything special to them. I just threw them in the oven as the brisket was baking. Since the brisket called for a lower temp of 325, the potatoes took a little longer than usual, but I totally anticipated it.

The Parmesan Roasted Asparagus is probably now my favorite method of preparing asparagus. Emily looked up the Barefoot Contessa’s way of making it in the oven because usually if I used a steamer they end up soggy. This recipe keeps them nice and crispy! 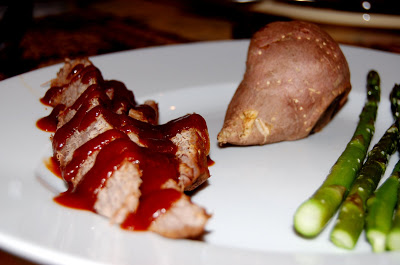 These biscuits were good in taste, but I’m afraid I made them a little too thin. Even so, they somehow maintained a light and flaky texture. Some of us ate them with butter, others (like Ben) wanted honey. They were delicious either way. 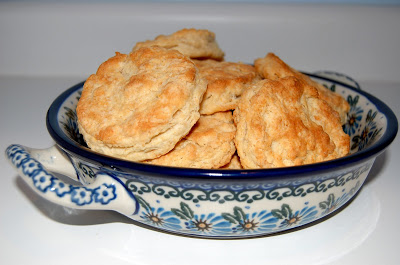 This is the coolest cake ever! It is extremely easy to put together, and then magically while baking it separates into two layers. The top layer becomes the cake while the bottom layer is the hot fudge sauce. So, you spoon the cake onto the plate, top with ice cream, then drizzle the sauce from the pan over the ice cream! Everyone licked their plates clean on this one. 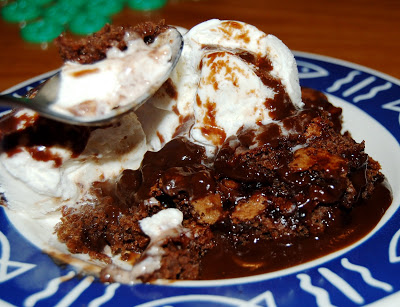 We ended up with a lot left over, which is the way I like to cook so that Ben and I can take advantage of the extra meals. In fact, we just got done eating our lunch from the leftovers! After I finish this post, I’m going to go warm up the left over cake! Happy Saturday!

We’re the Gladd family!
Gather around as we experience joy and community at the table! END_OF_DOCUMENT_TOKEN_TO_BE_REPLACED