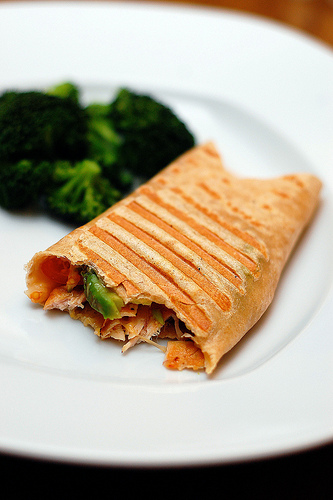 My boss treated us to lunch a few weeks ago at a local deli, where I chose an item on their menu that I’d never seen before…a wrapini!  It’s a wrap, but grilled on a panini press.  Brilliant!  It tasted just as brilliant, as well.  I had to recreate this at home!

The other day I got my chance.  We had leftover wheat tortillas from a weekend prep of making Taquitos.  We also had some chicken, cherry tomatoes, cheese and avocado.  Immediately my mind fell to that wrapini I had at the deli.  Although the one I ordered had chicken, bacon, ranch, tomatoes (the works!), I knew I could create a tasty and healthier version with these ingredients I had on hand.

Ben grilled up the chicken for me as I sliced the tomatoes and avocado, and heated the panini press.  Once the chicken was done, I just sliced it up, threw it onto the tortilla with the rest of the ingredients and grilled it.  Oh.my.goodness.  It was better than I had at the deli, and better than I could’ve ever imagined!  Originally, I meant to add a sauce of some sort and forgot.  But, I’m glad I forgot because it surprisingly was extremely flavorful without it!  I couldn’t stop eating my wrapini to take a photo, so I made one extra.  Darn!  I had to eat that one, too! 🙂

Spray one side of each tortilla with cooking spray; flip over.  Sprinkle a pinch of cheese into each tortilla.  Top with chicken, avocado and tomatoes.  Sprinkle on a little more cheese.  Roll and press on panini grill until cheese is melted and the tortilla is marked with golden grill strips.

We’re the Gladd family!
Gather around as we experience joy and community at the table! END_OF_DOCUMENT_TOKEN_TO_BE_REPLACED