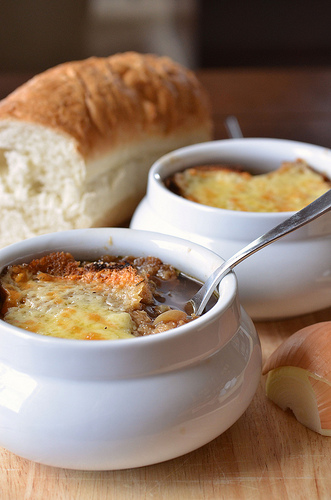 If you read my post on Friday, then you are well informed of my venture for recipes that will give me a new-found excitement for St. Patty’s Day each year.  This is the second recipe I tried in order to accomplish that goal.

This is basically a french onion soup, but I can’t tell you the specific differences as I have never made french onion soup.  I’ve had it a few times in various restaurants and usually regret my order because of it’s saltiness.  So, when I found this Michael Chiarello recipe for Guinness and Onion Soup, I was very hesitant to give it a try.  But, because the ratings were high and I had such success the other day with another dish that I normally don’t like, I took my chances. 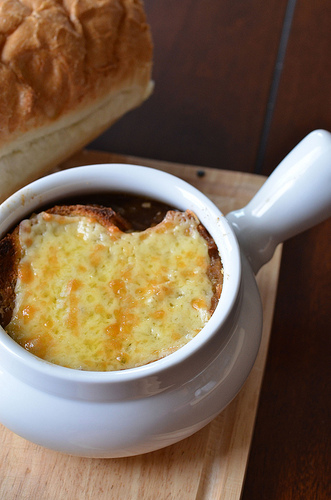 A friend was over helping us with some handy work, so he ate the soup with us and said he really liked it.  Hopefully it was the truth!  I’m sure it was, though, because both Ben and I loved it and couldn’t wait to have the leftovers again for lunch the next day.

I learned a few tricks for this recipe from reading the posted reviews.  For example, you must use a Guinness Draught and not the Guinness Extra Stout.  It’s also helpful to know that you should pour the beer into a glass and allow to settle for about 1 – 3 minutes before adding it to the pot.  The original recipe also calls for sherry vinegar.  I ended up using red wine vinegar because the sherry is expensive and the rest of it would sit on my shelf, unused.  Other tips and tricks are incorporated into my version of the recipe below. 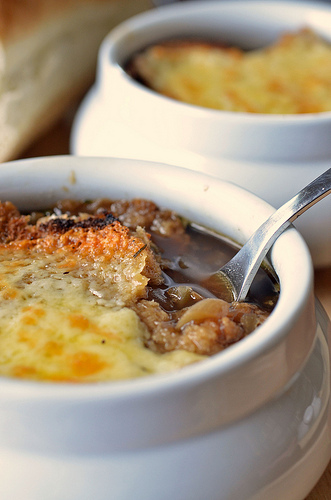 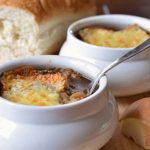 A French Onion soup made with Guinness and topped with Irish Cheddar Crouton.

Serving: 6g
Tried this recipe?Take a pic and tag @seededtable or #SeededAtTheTable to be featured!

We’re the Gladd family!
Gather around as we experience joy and community at the table! END_OF_DOCUMENT_TOKEN_TO_BE_REPLACED