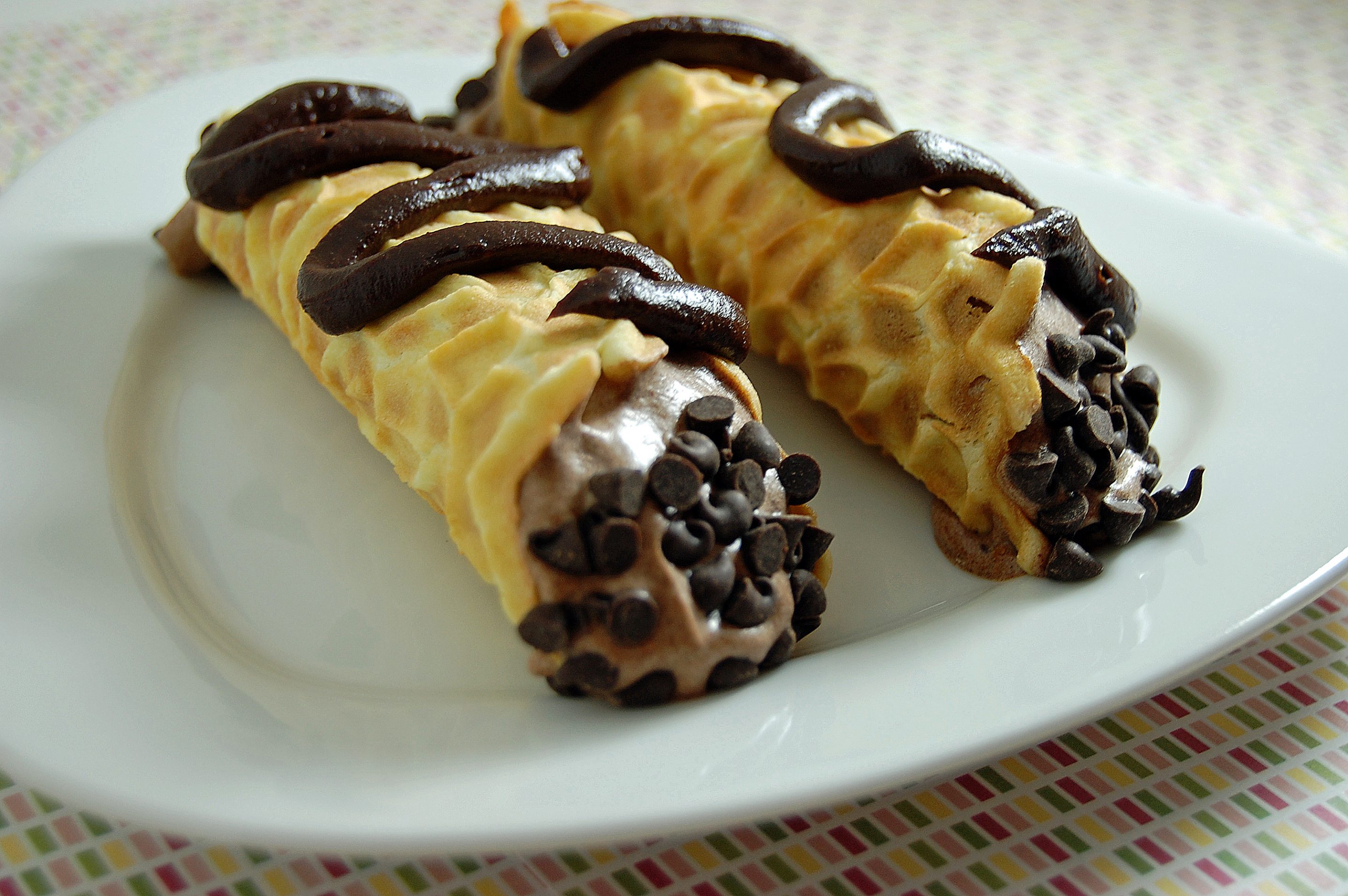 This isn't a traditional cannoli.  In fact, I was struggling with what I should call this dessert since this pastry is not fried and not filled with ricotta or mascarpone cheese.  This was the best I could come up with, but I think it says enough.

Cannoli originate from Sicily, which is where my ancestors originate, too!  Cannolo is the singular word, but have you actually heard anyone used the term? 🙂  The pastry dough is fried, and the filling is a sweet cream made of ricotta or mascarpone.  But, here is my cannoli, filled with chocolate mousse...and it's heavenly!

Dessert was my responsibility, again, for Easter dinner (yay!) and I wanted to think of something new. It was Friday afternoon and while I was preparing pizzelles for the dessert I was serving friends who were coming over for dinner that night, a revelation hit that I should roll some of the pizzelles into cannoli shaped tubes and use it for some kind of dessert for Sunday!   I didn't know, yet, what I would fill them with.  But, I knew I could find some delectable filling for that crunchy decadent rolled cookie.

Sure enough, I found exactly the filling I was looking for on AllRecipes.  (That website never fails me!)  It was a recipe for Heavenly Chocolate Mousse.  Perfect!  I read the reviews and made some tweaks, including using coffee instead of water.  And, wow! it turned out SO finger-licking delicious!!!!

I had leftover ganache from the dessert on Friday, so I used it to top the cannoli and then dipped the sides in mini chocolate chips.

This was actually a pretty light dessert, so a few of us had two helpings.  The mousse recipe made enough to fill at least 12 cannoli shells.

In a large bowl, beat eggs and sugar until thick. Stir in the melted butter and vanilla. Stir together the flour and baking powder, and blend into the batter until smooth.

Heat the pizzelle iron, and brush with oil. Drop about one tablespoon of batter onto each circle on the iron. You may need to experiment with the amount of batter and baking time depending on the iron. Bake for 30 to 45 seconds, or until steam is no longer coming out of the iron. Carefully remove cookies from the iron. Immediately and carefully, roll the pizzelle into a tube shape and hold for a few seconds until set.  Since you are doing two at a time, I set a fork on the first rolled one while rolling the second.  It sets quickly.  Cool completely on wax paper.

In a heavy saucepan or double boiler, heat chocolate, 1/4 cup coffee and butter on very low heat until the chocolate and butter are melted. Cool for 10 minutes. In another small heavy saucepan, whisk egg yolks, sugar and remaining coffee. Cook and stir over low heat until mixture reaches 160 degrees F, about 2-3 minutes. Remove from the heat; whisk in chocolate mixture. Set saucepan in the freezer and stir every 3 minutes until cooled, about 5-10 minutes. Fold in whipped cream. Spoon into a large ziplock freezer bag. Refrigerate for 4 hours or overnight.