You are here: Home / Uncategorized / Super Bowl… Stress and Success! 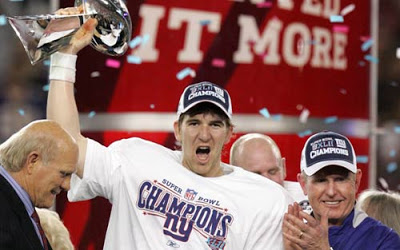 Yesterday we had a few friends over for the Super Bowl. I planned to make quite a bit of food… and mostly new recipes. For some reason, I thought I had all the time in the world to start making the food. When it got to be 3:45pm and I was on the video iChat with my Mother-in-Law and still hadn’t started making any of the dishes, you’d think I would’ve started stressing (people were coming at 5pm). Well… not yet, because I honestly thought that it would take an hour tops to get all my appetizers done.

Well… what was I thinking!? As I started the first recipe, then went on to the next, I realized that I needed help. Thank goodness my friend, T, walked in the door that very moment and poured me a glass of wine. She got her crazy cooking gloves on and we tore that kitchen up! But, I bet she thinks I’m half insane now for how stressed I was while we were making those recipes. Better yet, I think she thought I was crazy for planning to make so many things! waaaaahahahahaha!!!

What was on the menu? Well, nothing extremely elaborate or difficult. But, delicious items if I may. I “borrowed” recipes from Emily’s food blog Rediscovering the Joy of Cooking. We were at her Holiday Party and ate some of the food she has listed… so I thought I could use this opportunity to make something from someone else’s blog.

My biggest problem was with the Tomato Basil Elephant Ears. I do not have a food processor and thought my Kitchen Aid Blender would do the trick. Well, it finally processed the ingredients… kind of… but it took FOREVER! I planned to make her Fingerling Potatoes with Aioli. I had the potatoes cooked and ready to go, but then I noticed I’d have to use the blender again.. instead of a processor… and I said “forget it!” So, the fingerlings are in a ziplock bag in my fridge as we speak. Never served. 🙂

Another item I took from Emily’s blog was the Kielbasa Appetizer. T pretty much made this dish as I worked on the Hamburger Potato Bites (not from Emily’s blog). I was so excited about the Hamburger Bites, but then I torched them in the broiler because I completely forgot about them! ugh! They turned out edible, but not cute at all. So, the shameless ‘foodie’ that I am… I made them again for dinner tonight so I could make sure to take appetizing photos! 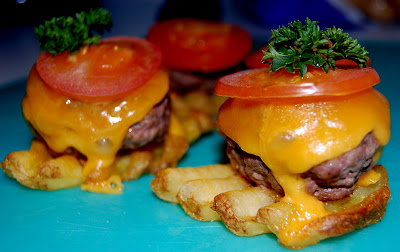 Because of the chaotic hustle and bustle in the kitchen yesterday, I didn’t take any pictures of the food. Which is fine because I’m just linking you over to Emily’s blog and giving you the photo of the hamburger bites.

T also brought some delicious bruschetta type appetizers and an awesome chocolate chip (low-fat) cheesecake! I’ll have to snatch that recipe from her sometime!

Beyond all the stress… there was success! And, not only success in the kitchen, but success on the field. Go Eli! Go Giants!

We’re the Gladd family!
Gather around as we experience joy and community at the table! END_OF_DOCUMENT_TOKEN_TO_BE_REPLACED