Let your kids build their own personal pizzas, while you spend priceless face-to-face moments with them.

Face to face time in the kitchen with my kids is very important to me.  It's one of the reasons I re-branded last February, and it's also the reason when we were looking for a house to buy last year the kitchen had to be desirable.  I'll take a narrow yard, a smaller garage, subtract a bedroom, and other areas of sacrifice in order to have a kitchen where my entire family fits comfortably and can make memories happen.  (And I totally know that those "sacrifices" are not real sacrifices... I feel very blessed and very thankful for every square foot of my house.)

I was challenged by BonAppetit.com in conjunction with their new "Out of the Kitchen" series to reflect on how I value personal relationships in my kitchen.  So, today's post is focusing on a simple way to have face to face time with your little ones in the kitchen.

It may seem easier to have older kids working along side you while cooking, and they are likely more help than young tots.  But, getting your kids familiar with cooking at a very young age not only helps them become your best sous chef later, but it also gives them (and you!) priceless memories of your short years together (which I've heard flies by way too fast).

Plus, the things kids say and do when they are 3 and 4 are hilarious!  Having them in the kitchen with you at this age just gives more opportunity for such comedy.  😉

Judah and I have spent countless hours together in our kitchen, usually baking up some sort of sweet treats like cookies, donuts, and candy.  But, what I want to incorporate more is teaching him how to make actual meals.  He loves to help me roll taquitos, and every day for quiet time he pops his own microwavable popcorn.  But, how about making his own pizza!?

Although it's a simple one, this idea really didn't occur to me until we visited family in North Carolina this summer.  My sister-in-law, Heather, had ingredients on hand so that we could have our (total of three) kids make their own pizzas for lunch one afternoon.  It was a fun little activity, and really didn't cause much of a mess because everything was set out for them and ready to go.  Heather covered the table with some plastic, then set a personal sized pizza crust (unbaked) in front of each kid.  We then gave every child a bowl of sauce with a spoon, a few pepperonis, and a mound of shredded cheese.

The kids then went to work using their spoons to spread the sauce, strategically placing each pepperoni on top, then piling on the cheese.  It was fun to see them sneak a few pepperonis into their mouths, along with a taste or two of the cheese.  It was also interesting to see the personality of each kid shine.  My Judah had to carefully place each pepperoni, while his care-free cousin more artistically threw hers on.

We then took the prepared pizzas and threw them into the oven where they quickly baked.  The kids were so proud of their creations and were very happy to eat the pizzas right up!

By spending time in the kitchen with my young kids, I'm hoping they are generating not only a love of cooking, but also awareness to the importance of face to face relationships, which will hopefully trickle forward into their future endeavors.  Who knows, maybe one of them will open their own restaurant some day! 🙂

This is a sponsored conversation written by me on behalf of Bon Appetit. The opinions and text are all mine. 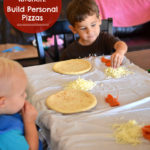 Your little tots can build their own pizzas while you create priceless memories with them in the kitchen.
Prep Time15 mins
Cook Time10 mins
Total Time25 mins
Servings: 4 personal pizzas
Author: Nikki Gladd