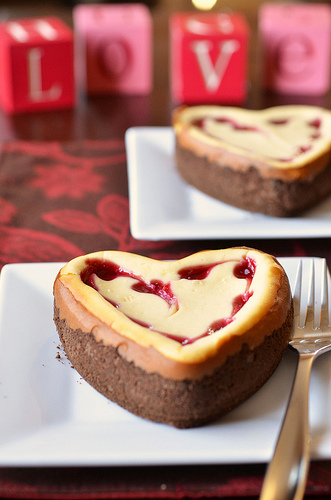 I have to apologize (or do I?) for all of the sweets I’ve been posting lately.  When Valentine’s Day approaches each year, I find myself leaning towards desserts more than anything else.  You now know the way to MY heart!

I’m guessing there are many of you who would like to save your pennies by cooking dinner at home instead of emptying your pockets to one of those packaged Valentine’s “deals” that restaurants seem to hype up.  And, since Valentine’s falls on a weekday this year, you more than likely will lean to something quick.  So, why not plan ahead and make a dessert this weekend that will be ready for you right after that romantic dinner you whipped up?  This cheesecake can be made up to four days ahead of time.  Just store it in your fridge and pop it out about an hour before serving (if you like cheesecake at room temperature) or just a few minutes before serving (if you prefer it cold, like me).

The springform pans I used were clearance items I picked up last year at Target.  They are miniature heart shaped springform pans by Wilton.  Even though these are only 4-inch pans, and the original recipe is for an 8-inch circular springform, I decided to make the whole recipe and filled a few silicone pans I had with the extra cheesecake to freeze for later.  The recipe below reflects the original 8-inch sized cheesecake, with notes added on baking for the 4-inch heart shaped pans.

Another change I made was using regular sour cream instead of the reduced-fat that it called for.  Not that I was opposed to using reduced-fat, I just had regular on hand and didn’t want to run to the store again.  It turned out just fine!

The raspberry sauce is not pictured above, except for the marbled hearts incorporated into the cheesecake filling.  To create these hearts, use the same method I showed you for the sugar cookies the other day.  Just use the raspberry sauce to create circle drops around the border of the cheesecake, then run a toothpick through them to create the hearts.  Simple as that! 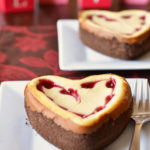 For the Raspberry Sauce:

We’re the Gladd family!
Gather around as we experience joy and community at the table! END_OF_DOCUMENT_TOKEN_TO_BE_REPLACED