When Simon turned five, he wanted a Charlie and the Chocolate Factory themed birthday party.  I was ecstatic!  What a fun and easy theme! 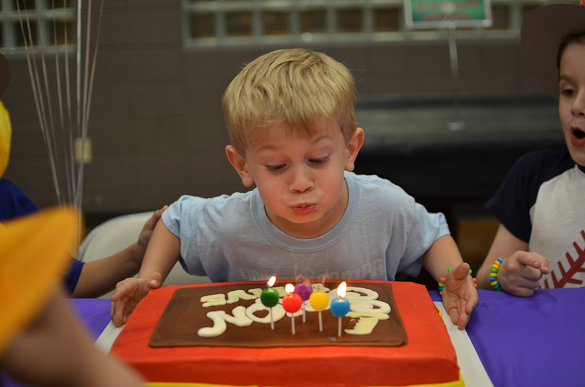 We had just watched both versions of the movie (Willy Wonka and Charlie) and the elementary school read the book, so the theme was fresh in our minds.  I didn’t want to spend a ton of money or have to do a lot of prep.  AND, I didn’t want to host a bunch of kids in our house.

SO, I rented the gym of a local church that is 5 minutes down the road — perfect.  It includes use of the gym plus a separate area for setting up tables for food.  I didn’t plan any games in the gym, and had all the activities in the food room.  But, the kids loved running around the gym, creating their own play, too. 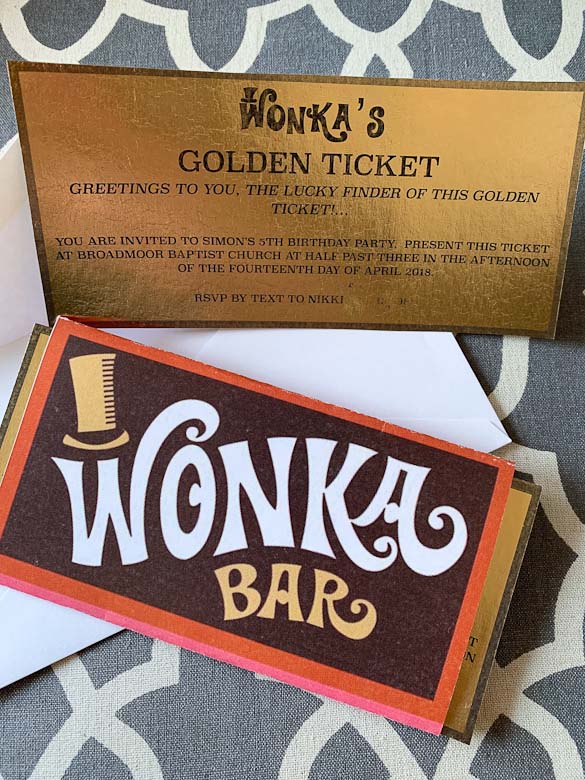 For the party invitations, I wanted a chocolate bar with a golden ticket inside giving the party information.  I found a printable online for the outer wrapper — I can’t remember where!  These were printed on regular card stock then folded to resemble a candy bar.

For the golden ticket, I created my own Word document and used Willy Wonka font I downloaded for free online.  I printed the golden ticket on shiny gold card stock I found at Michael’s.  They were just the right size to fit inside the outer wrapper. 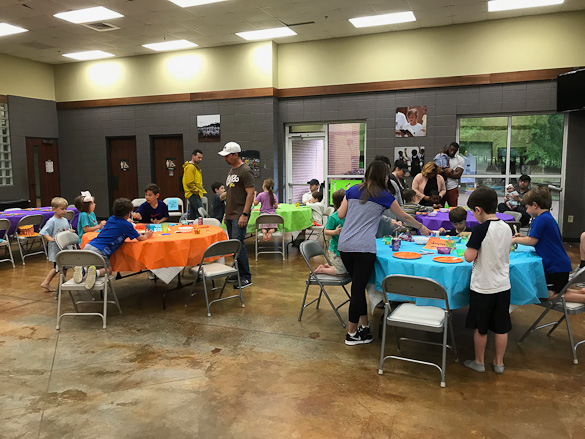 In the food area, I set up four round tables as activity stations and then two large rectangle tables for displaying the food and sitting to eat the food. 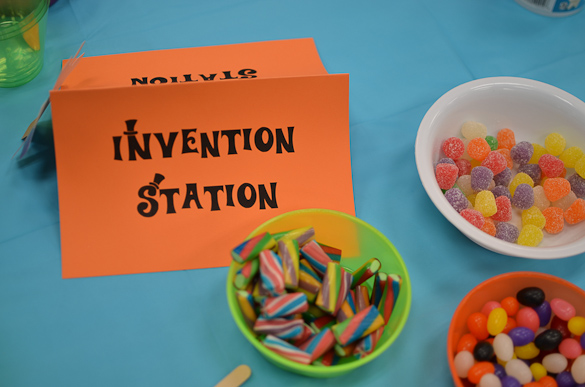 Two tables were dedicated for “Invention Stations”.  This is where the kids used their imaginations to create their own candy inventions.  I set out various random types of candy with frosting to act as glue.  They used popsicle sticks to apply the “glue”.  This got pretty messy, and the kids couldn’t help but eat their inventions before actually finishing them! 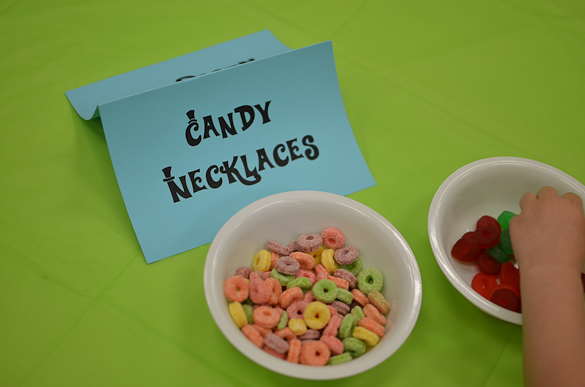 The other two tables were set up for “Candy Necklaces”.  Here, they had strings and fruit loop type cereal as well as gummy lifesavers to thread on the string and make necklaces. 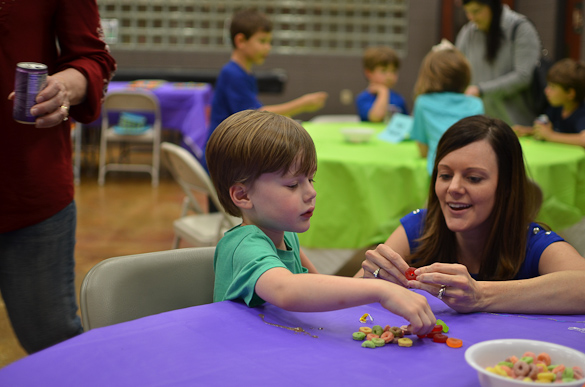 I liked having two tables for each station so we could split up the groups and rotate in 10-15 minute increments.  Worked out really well! 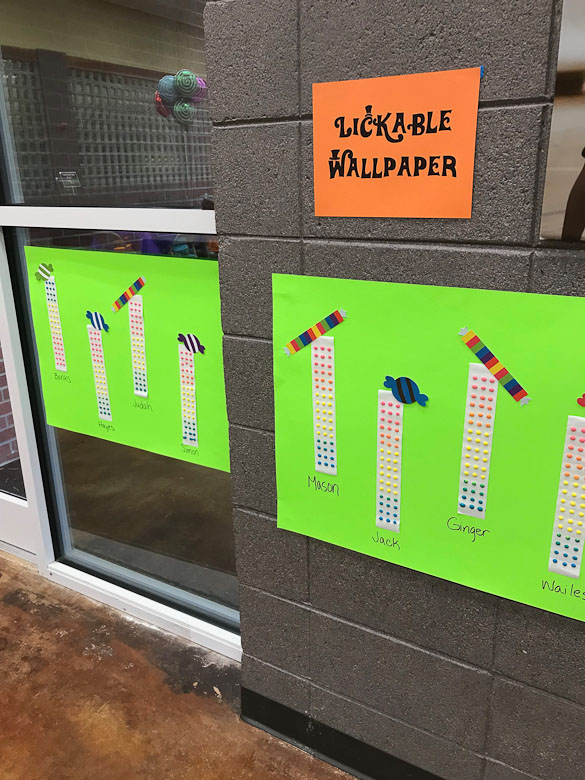 On the wall, I hung up poster boards with candy dots glued to them for Lick-able Wallpaper.  Each kid had their own dedicated strip of candy dots to lick!  This was a hit and it was hilarious to watch the kids try to bite off the dots! 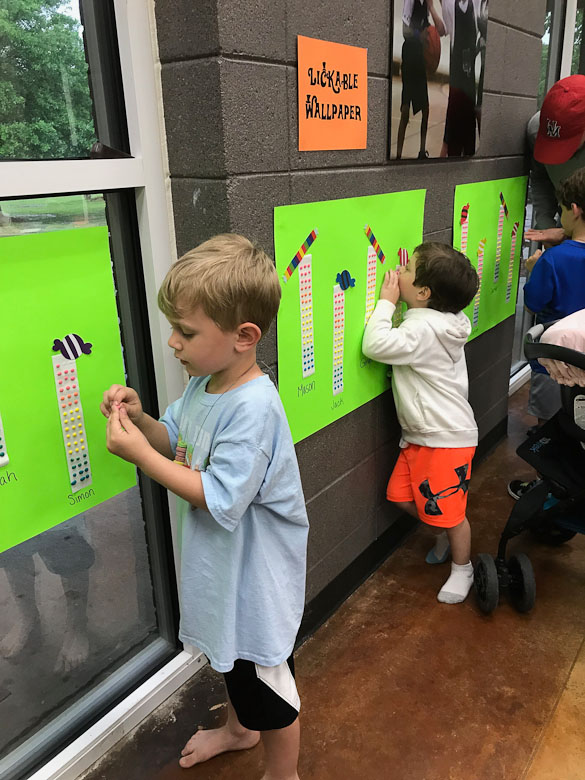 Looking back, I probably shouldn’t have hung these on the concrete wall.  There was one kid who kept bumping his teeth against the wall and that did not feel good!  Ha!

For another activity, we set out a couple of over-sized blue t-shirts for the kids to wear and stuff in as many blue balloons they could.  The balloons represented blueberries for Violet turning into a blueberry.  This was so funny to watch! 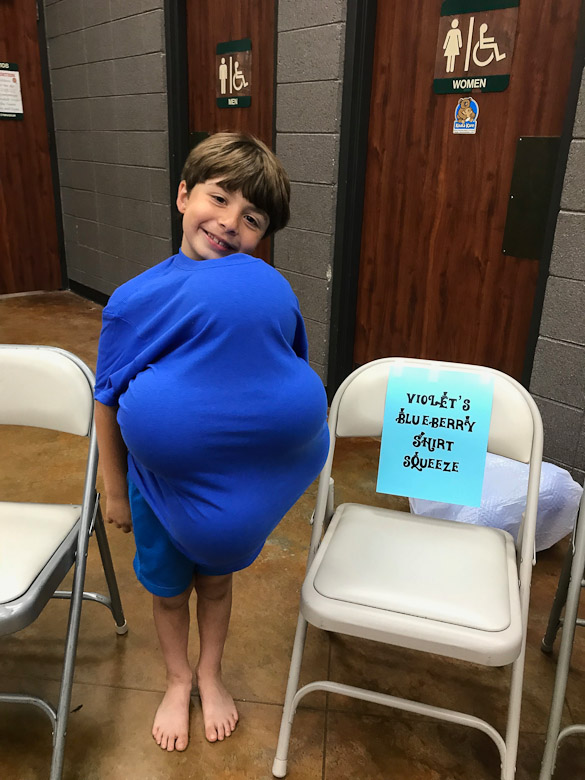 I love having a photo booth at parties, but I didn’t want to pay a professional.  So, I bought a tri-fold poster board and glued wrapping paper on it for a fun colorful backdrop. 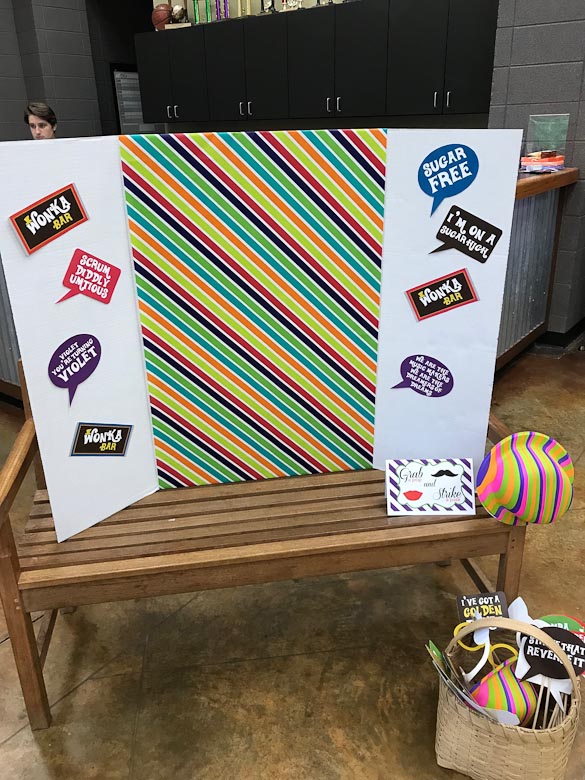 I bought these Willy Wonka photo booth printables from Etsy, printed them on card stock and taped them to wooden skewers.  (I bought them for $4.99 but it appears she’s raised the price to $7.99.) 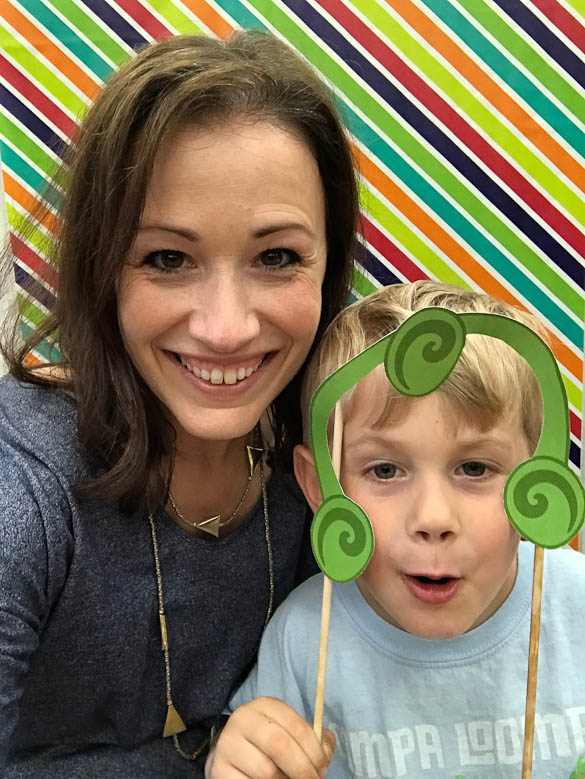 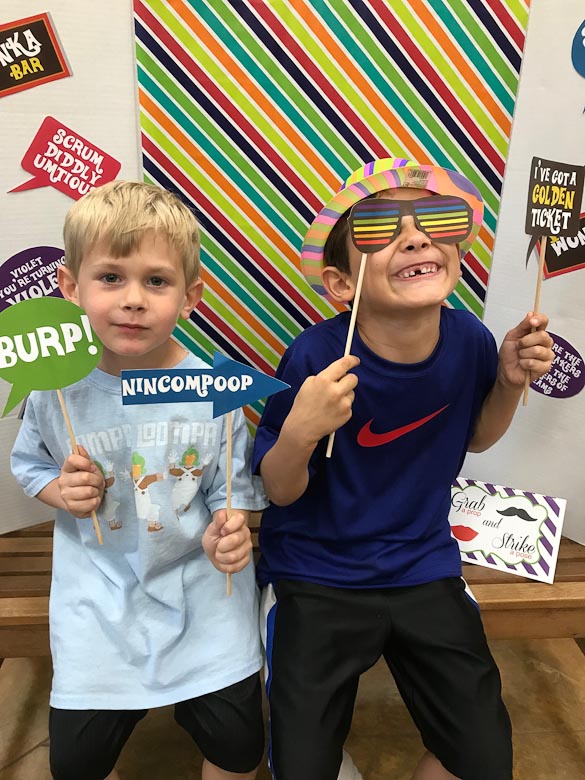 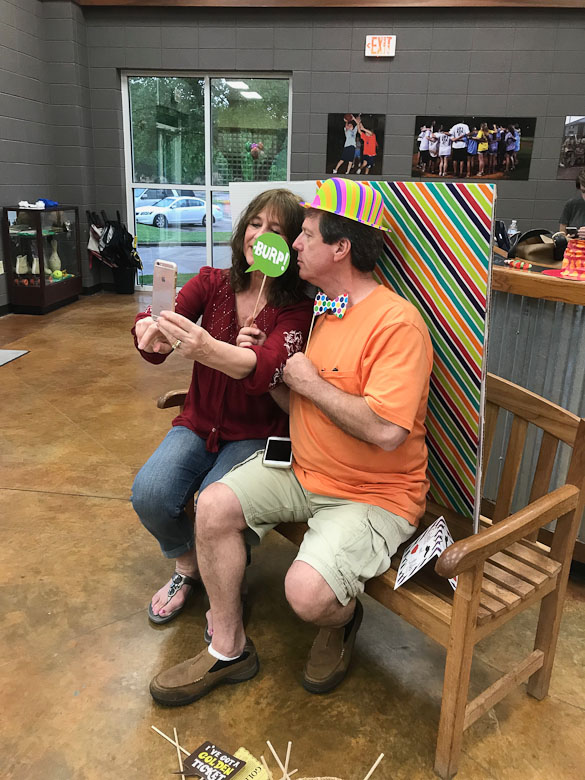 My parents even got into the fun! 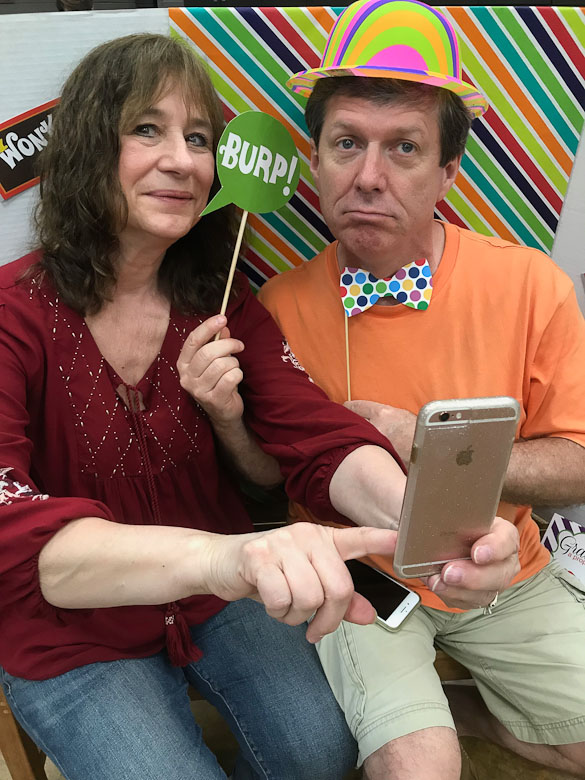 Everyone had fun with the Willy Wonka photo booth props!  I love some of the quotes! 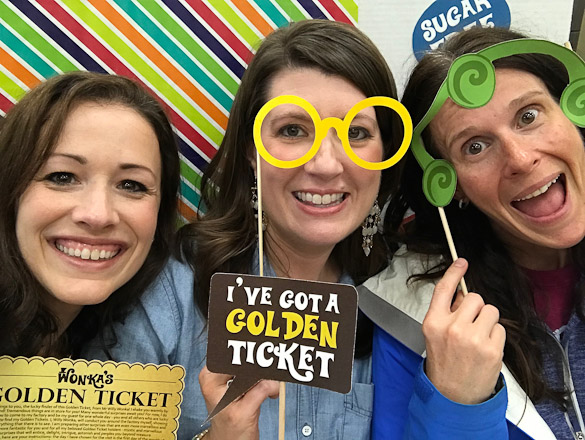 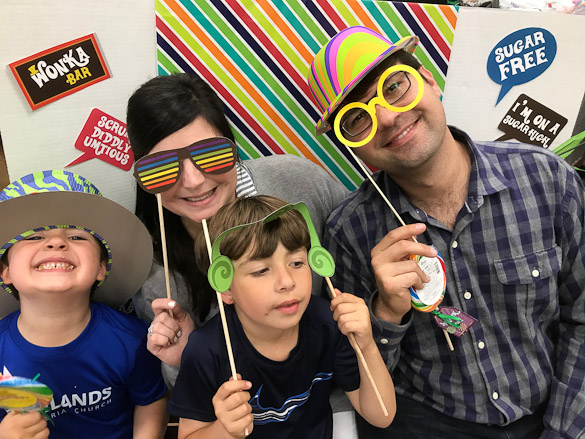 Photo booths are a great way to capture photos of party guests with their own camera phones! 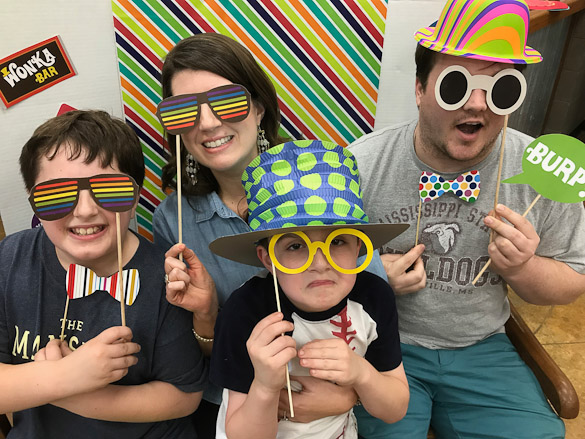 We kept the food very simple, too.  Since the party was from 3:30pm to 5:00pm, we didn’t have to serve lunch or dinner and stuck with cake and snacks.  I set out Oreos, pretzel sticks, rainbow colored popcorn, cotton candy, gumballs, chocolate pudding and goldfish crackers. 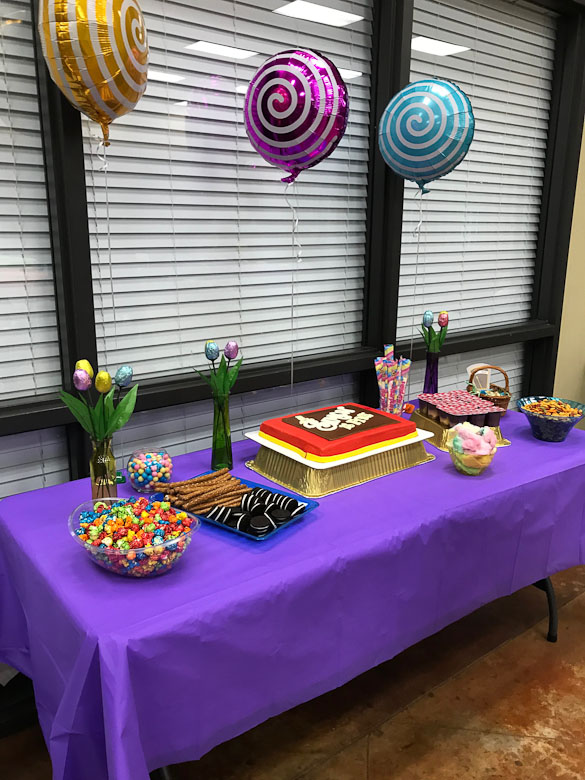 The cake was from a local bakery.  I asked them to make me a cake that looked like a Willy Wonka chocolate bar.  It turned out just okay in appearance, but the taste was excellent!

I also set out golden eggs (chocolate eggs wrapped in gold foil) that I ordered from Amazon.  But, I forgot to get a picture!  Because Easter was just a couple of weeks prior, there were great sales on candy so I found chocolate tulips to give to the parents as a party favor. 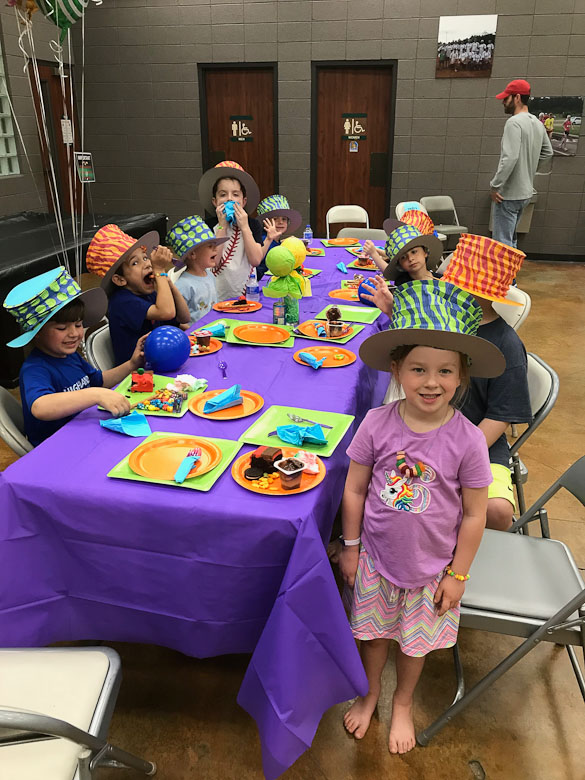 Speaking of party favors, I didn’t think it was necessary to put together a separate party favor to hand out at the end.  Instead, I placed a candy bracelet on each of the kids’ plates as well as a fun accordion style party hat that is resemblance to Willy Wonka’s hat.  I found them on Amazon, as well. 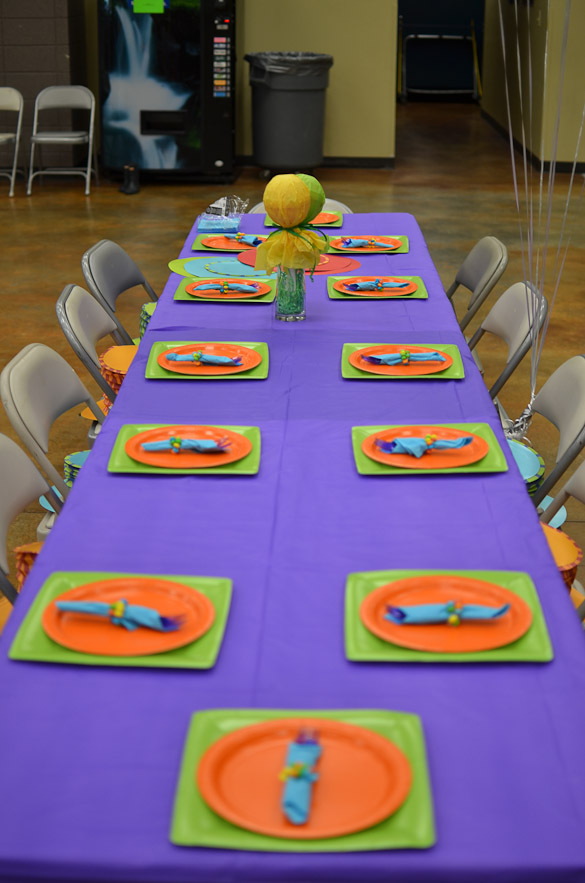 I really enjoyed the color scheme!  It was simple to buy a purple plastic tablecloth and fun colored plates, napkins, utensils, etc.  Really dressed up the table all on it’s own! 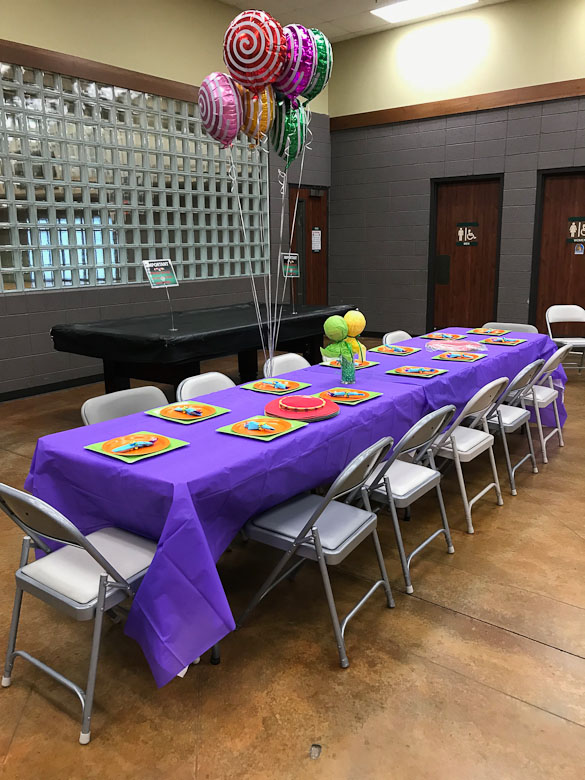 The balloons were a lot of fun.  I bought them from Amazon and took them to Party City to fill with helium.  They reminded me of lollipops (which was the point). 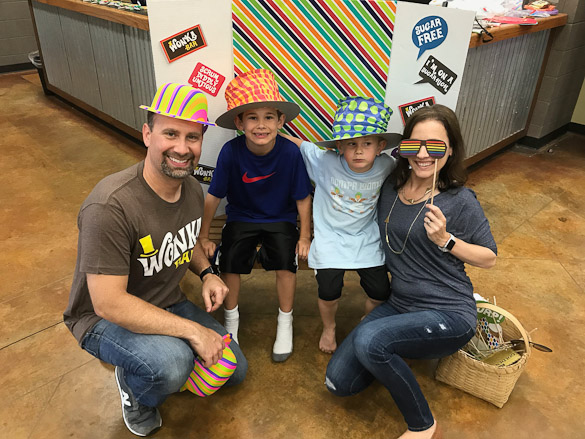 Overall, this party was a ton of fun to put together!  We left with some really good Willy Wonka memories!

PS – Simon’s Oompa Loompa shirt was also from Amazon.  (Do you see a pattern here?)  🙂

We’re the Gladd family!
Gather around as we experience joy and community at the table! END_OF_DOCUMENT_TOKEN_TO_BE_REPLACED