Last week, my family and I headed to Austin, TX for the annual BlogHer Food Conference.  Even though I've been blogging for 6 1/2 years, this was my first year attending.  Can you believe that!?  The weekend was filled with fun, laughter, friendships and tons of AMAZING food!

I have SO many photos to share, so I'm going to split this into two or three different posts with details of our time in chronological order.

We drove from our home in Mississippi to Austin, which should have taken about 8 1/2 hours, but really ended up being about 11 hours because traveling with two young kids makes for longer and more frequent stops. 🙂  Interestingly, though, the distraction of the kids made the trip feel shorter.

We arrived our hotel at approximately 7:00PM Wednesday night and were starving.  So, we dropped off our luggage and headed out to our first food venture that Ben found was right around the corner, called Easy Tiger. 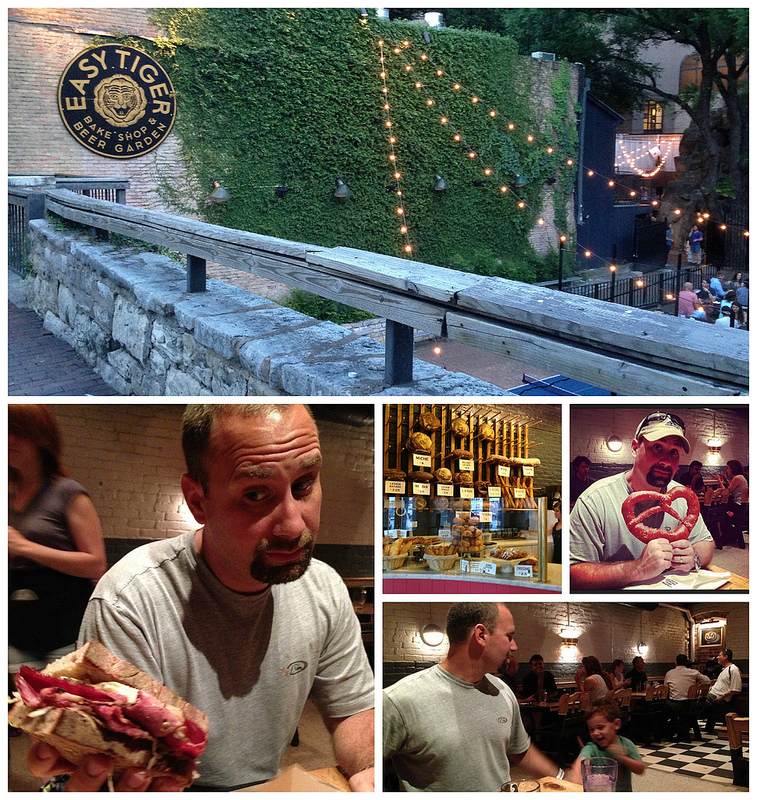 Easy Tiger is a bake shop and beer garden, serving up huge German soft pretzel twists and the most amazing pastrami sandwich.  We also recommend the beer cheese with your pretzel.  The bake shop is upstairs while dining is located in the spacious basement or outside under the trellis lights. 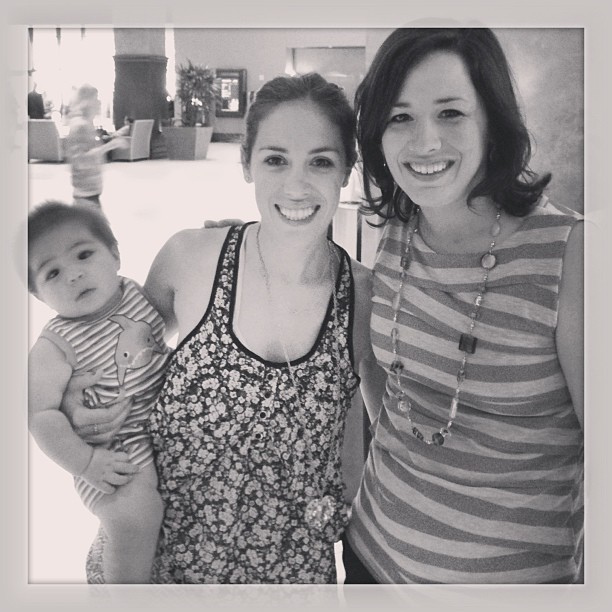 The next day we met up with my friend, Krissy, and her adorable family.  We actually hung out the entire weekend since our hubby's hit it off and we both had our children with us.  Not only was Krissy the BEST conference buddy, but she is also a great friend. 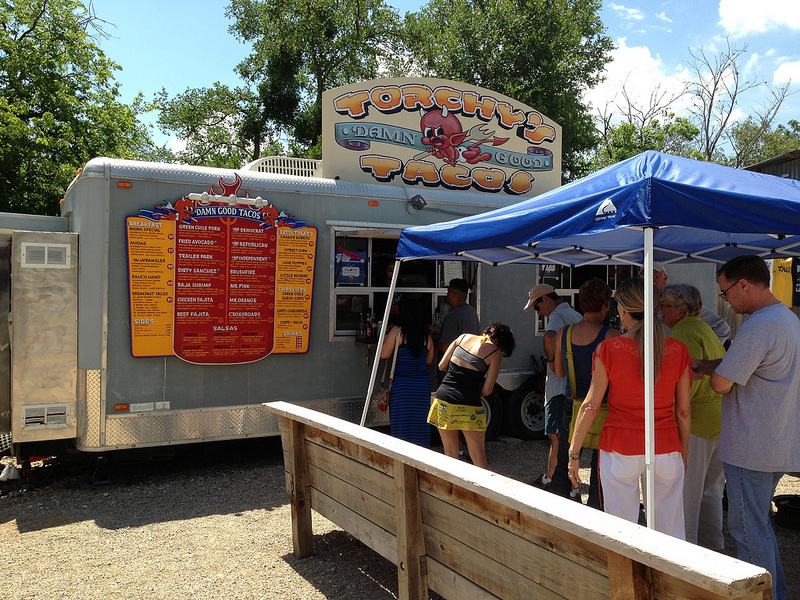 By the time we were ready to venture out together, it was lunch time, so we headed to Torchy's Tacos, one of the many popular food trucks in Austin.  I'm sad I didn't get a photo of my tacos, because they were SO fresh and tasty!  I ordered The Democrat and Ben ordered Green Chile Pork.  We split the chips and guac, which were outstanding, as well.

After Torchy's, we walked just a block down the street for dessert, to another food truck called Gourdough's.  Gourdough's serves up big fat donuts of combinations that you wouldn't believe! Seriously, check out their menu!

The four of us decided to pick one donut each and share with everyone.  Krissy and Steve chose the Funky Monkey and Son of a Peach, while Ben and I chose the day's special, Key Lime Pie and Granny's Pie.  They were so big we couldn't even finish any of them, but each one was extremely delicious! My favorite was the Funky Monkey.

It was then time to head back to the hotel to take another shower (since the heat and humidity just about melted me away) and get ready for my first party of the weekend with Dixie Crystals and Imperial Sugar.  They whisked us away in a limo to a local spa where I was pampered with a pedicure, while sipping and feasting on some tasty treats and mingling with some blogging buddies. Such a great way to be welcomed to Austin.  Thank you!!

This event is where I met a few bloggers I've known online for a while, including Kristan and her sweet baby, Lucy.  Of course, this was Simon and Lucy's first time meeting, as well.  I think they had a lot to talk about! 😉  Unfortunately, between balancing Simon in my arms and trying to catch up with friends, I forgot to take any pictures except this one, right before walking into the spa!  But, I did have a great time and am excited to use my homemade sugar scrubs we were given to take home. 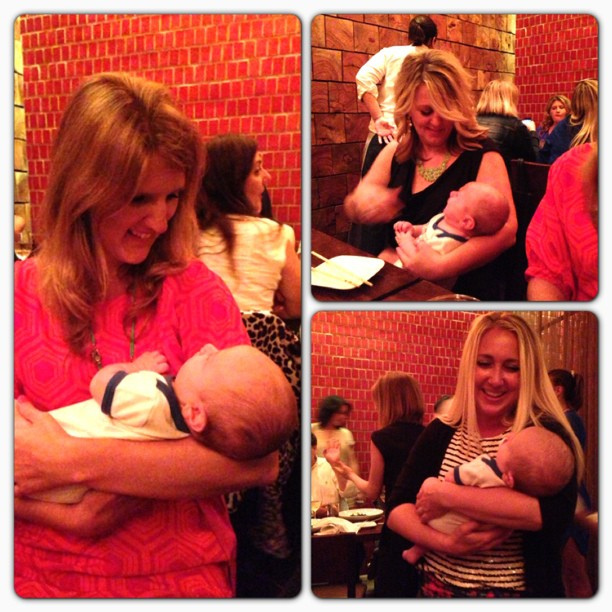 Next up was one of the most fabulous dinners I've ever had, hosted by KitchenAid at Uchiko.  Have you seen KitchenAid's new blog?

I got to see sweet Jenny again, and meet some other fabulous bloggers I'd been dying to meet, like Amanda, Lisa, and Cheryl.  They all made sure to get their snuggle time with Simon, too.  Plus, I have to say it was quite fun sitting across from Jaden and next to Todd, who thankfully didn't make fun of my lack of chopsticks skills.  I actually felt very lucky to have such knowledgeable foodies near me, explaining every dish that was placed in front of us and making sure I got a bite of everything since it was a little difficult to eat with Simon wanting to eat at the same time! 🙂 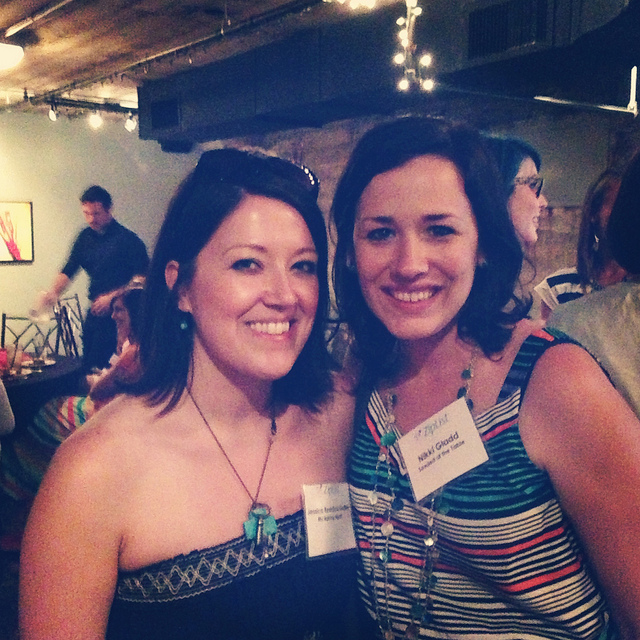 After leaving the KitchenAid dinner, I fully intended to head over to a couple of other parties by Tasty Kitchen and Stonyfield, but it was later in the evening than I planned and Simon was ready to get back to the hotel.  So I had to miss those, but once I got Simon settled into bed, I left him with Ben at the hotel and headed to a dessert party with Krissy, sponsored by ZipList, where I saw one of my dear friends again, Jessica.

If you don't know this already, ZipList is who lets you save your favorite recipes on here to your own personal recipe box.  If you don't use this feature yet, click on the Recipe Box in my sidebar and get started!

That's it for part one!  Stayed tuned for parts two and three, soon!