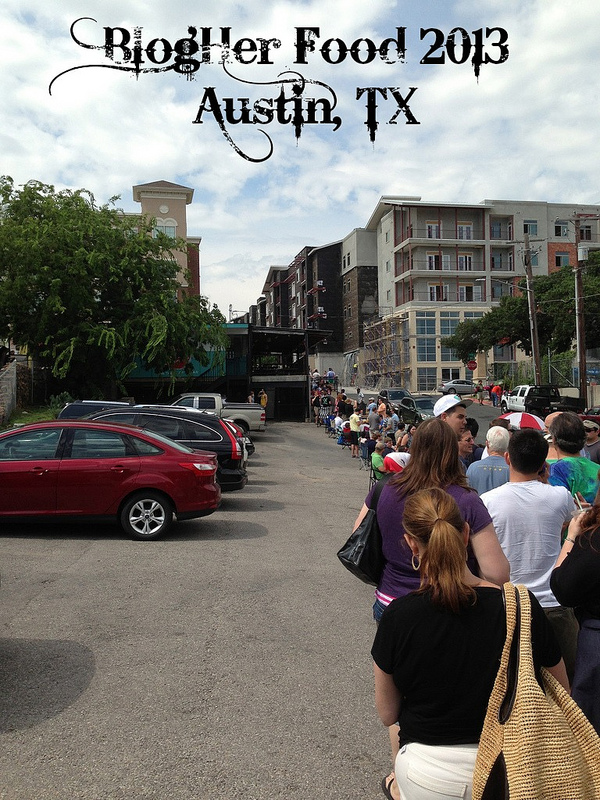 (If you missed it, click here for part 1 of my trip to Austin, TX for the annual BlogHer Food Conference.)

On Friday, we had another lazy morning start and it was once again lunch time before we knew it.  We were crazy for thinking we could get into Franklin Barbecue for lunch. These people were lining up since 8:30AM!  From this point in the line, it would've been a 2 ½ hour wait, and by then they said most of their menu items would be sold out.  So, we moved on and found somewhere else to fill our appetites.  Good thing Austin is FILLED with FABULOUS restaurants! 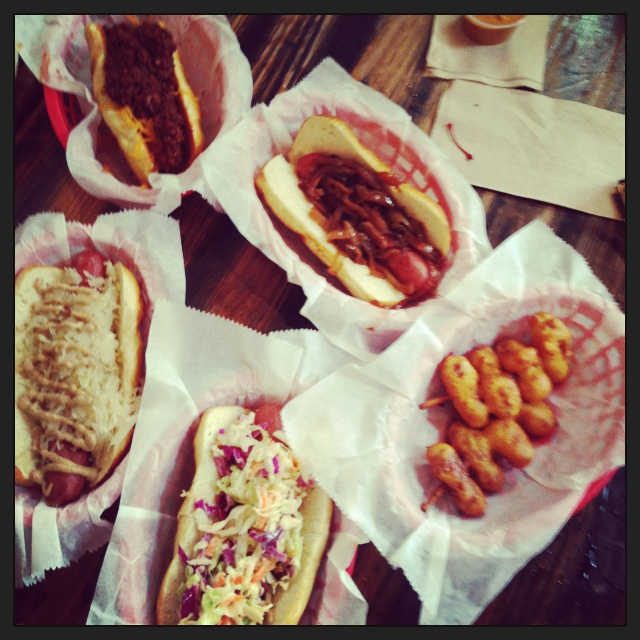 After scoping out our iPhone maps, we quickly agreed on the restaurant, Frank, where the hot dogs are locally made.  I ordered the Slaw Dog and Ben got the Hot Polish, both on pretzel buns!  I can't remember which hot dogs Steve and Krissy ordered, but I didn't hear one complaint from anyone.  We also got the Lil Smokie Corn Dog Bites for Judah and hummus with pita chips to share. Everything was great!

We decided to head back to the hotel and check out the sponsor booths at the conference.  I'm so glad we drove to Austin instead of flying, because there was so much swag given out!  I didn't have to worry about picking and choosing what to take, because I knew it would fit in my car.  🙂

One of my favorite stops was the Keurig booth featuring their Brew Over Ice varieties.  If you remember, I was a K-Cup Ambassador this past year and was able to sample many different K-Cup packs.  (Disclosure: They offered me another Keurig machine in exchange for sharing about their Brew Over Ice K-Cup packs, but that really wasn't even necessary because I'm already a huge fan of them!) 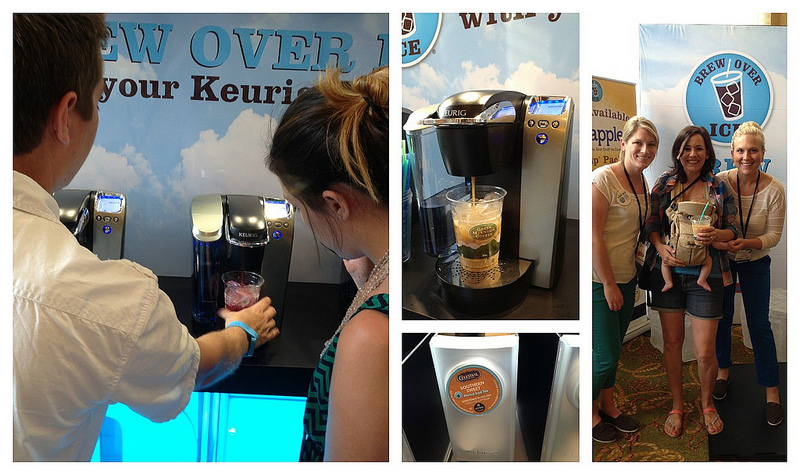 Elizabeth and Lindsay (pictured above) are two of the Green Mountain Coffee Roasters representatives I enjoyed working with in the last few months, so it was fun getting to meet them in person!

Their booth had several Keurig machines plugged in, ready to give Brew Over Ice demonstrations. It's so easy, people!  Just fill your 16 oz cup (not glass) with ice...and I mean FILL IT... then hit brew!  I probably visited this booth too much, but they were such a fun crew and, honestly, I couldn't get enough of their drinks!  Their new Southern Sweet Tea and the usual favorite Vitamin Burst were a perfect afternoon boost, for sure! They even let me bring Ben a cup of his favorite Sweet & Creamy Iced Coffee back to the hotel room. 🙂 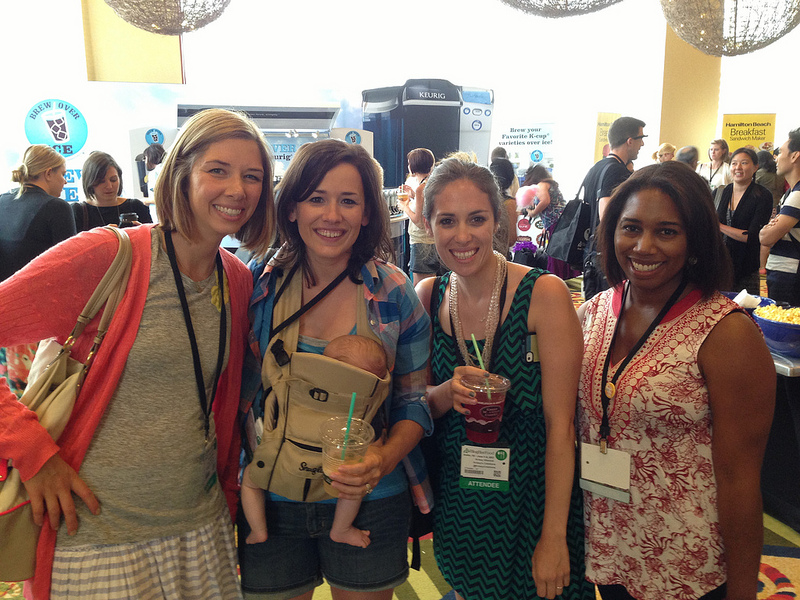 See? We're even sipping on our K-Cup drinks while taking photos with new blogging friends! (Pictured above from left to right: Amelia, Me, Krissy and Kathy)

And, I have to share this because I literally just saw it on their website (honestly, I wasn't told to tell you this!)  🙂  If you buy any two Brew Over Ice varieties at GreenMountainCoffee.com, you will not only get free shipping, but also two free tumblers!  I have these tumblers and they are the perfect size for brewing over ice!  Plan on ordering K-Cups regularly?  Join their Cafe' Express Savings Club to set up deliveries and save even more! 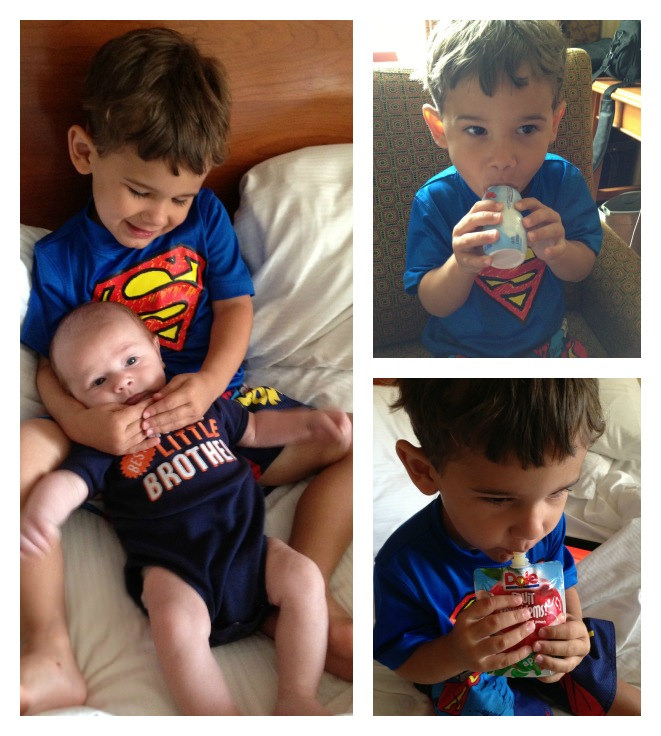 Judah even benefited from the booths at the conference, as I was able to bring back a few treats for him.  He kept asking "do you have another surprise for me?" every time I returned.  He was also happy to snuggle with Simon! 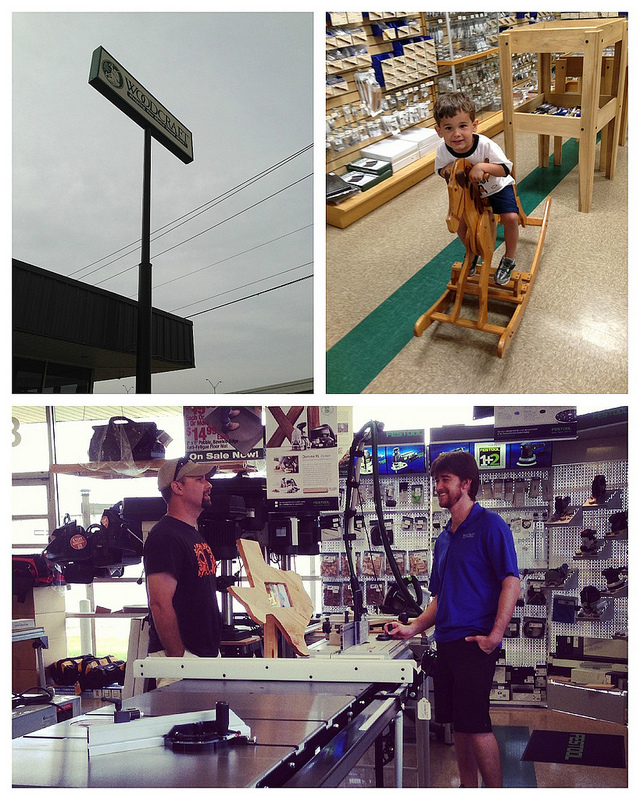 Later, Ben was dying to check out Woodcraft, a wood working store he's heard so much about.  Coincidentally enough, they have a location just 15 minutes north of downtown Austin.  We spent a little bit of time there, then headed to a local burger chain for a quick dinner.  (More about that in a future post.) 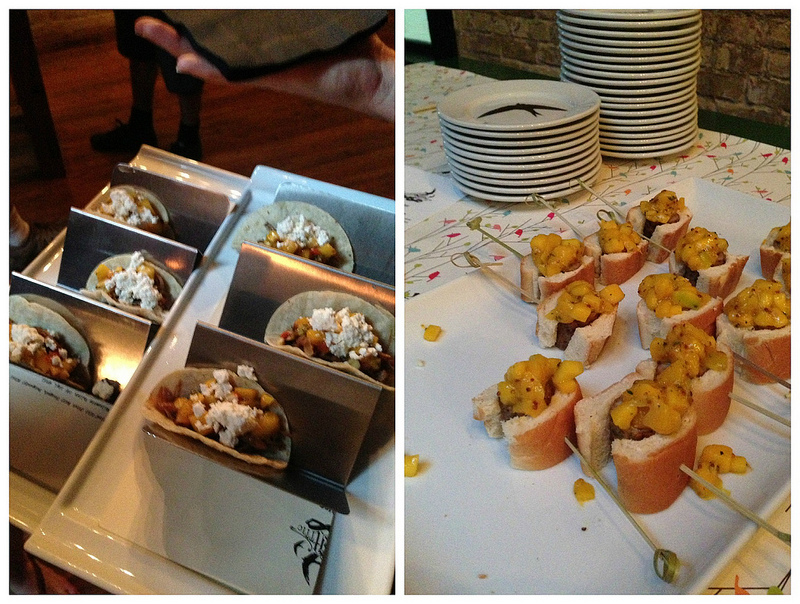 When we got back to the hotel, I met up with Krissy again and we headed to a couple of cocktail parties.  First up, a party hosted by The National Mango Board where we were able to sample various dishes all with mango geniusly (not a real word?) incorporated.  Surprisingly, my favorite were the Brussels sprouts.  In fact, I made them for dinner the first night after returning home! 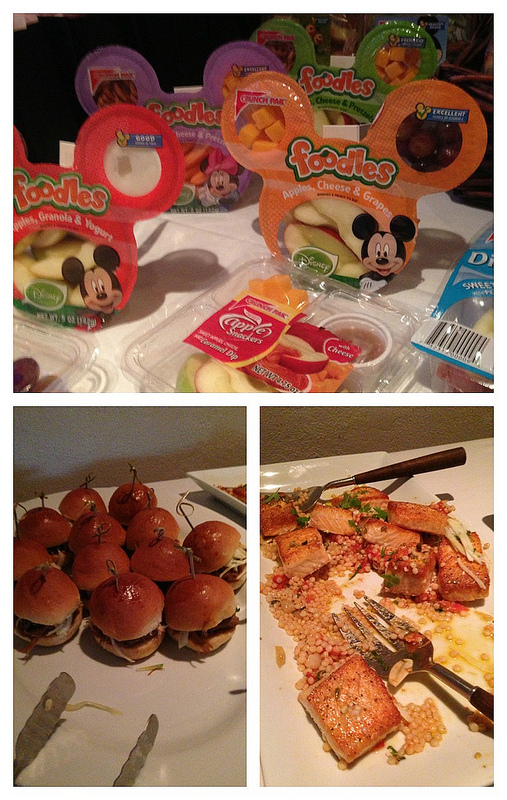 We then walked over to a party hosted by CrunchPak and Mann's. I was bummed that I was already so full from dinner and the previous party, because the food here was SO good.  The salmon pictured? AH-mazing.  Judah loves those Disney Foodles, too, so I snatched a couple for him to take back to the hotel.  Yep, no shame! 😉 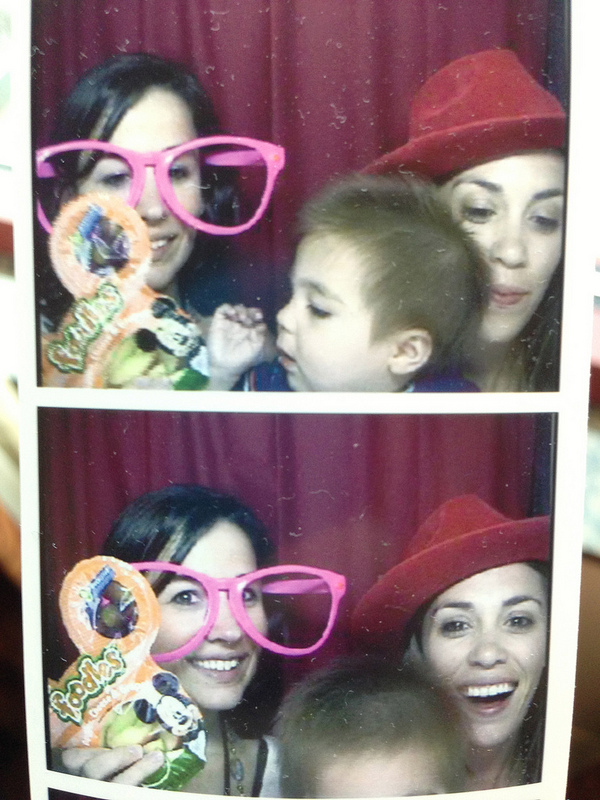 They had a fun little photo booth set up that we definitely had to use before leaving. 🙂  Isn't Krissy's little "Zeke" so adorable? 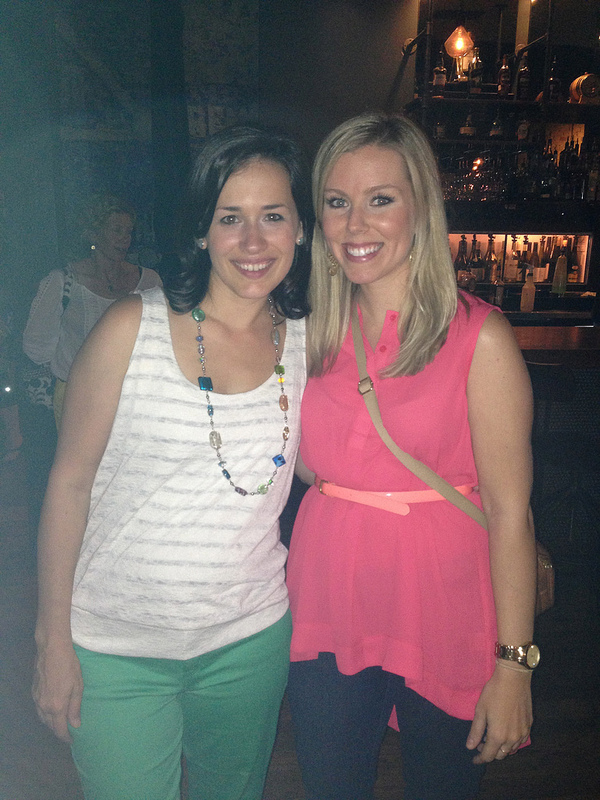 We then walked (again) to another cocktail party where my Austin-ite friend, Jess, was waiting for us. I could not wait to see this fun-loving lady again!  We spent time chatting, laughing, and catching up before heading to one more party where another photo booth opp was in order.  🙂 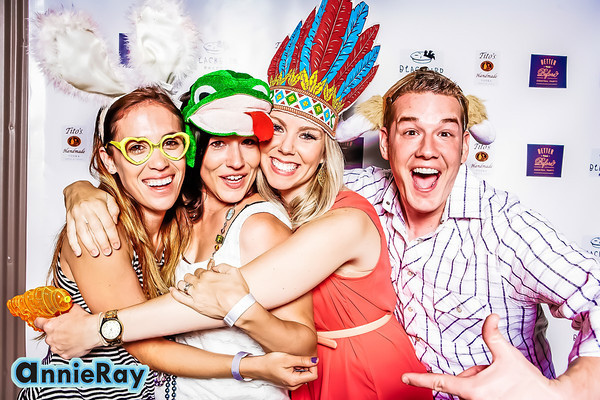 We called it a night after that.  Exhausted!

You might be wondering what Judah and Ben were doing during the times I wasn't with them?  They were hanging at the pool a lot, and doing karate kicks in the hotel room. 😉 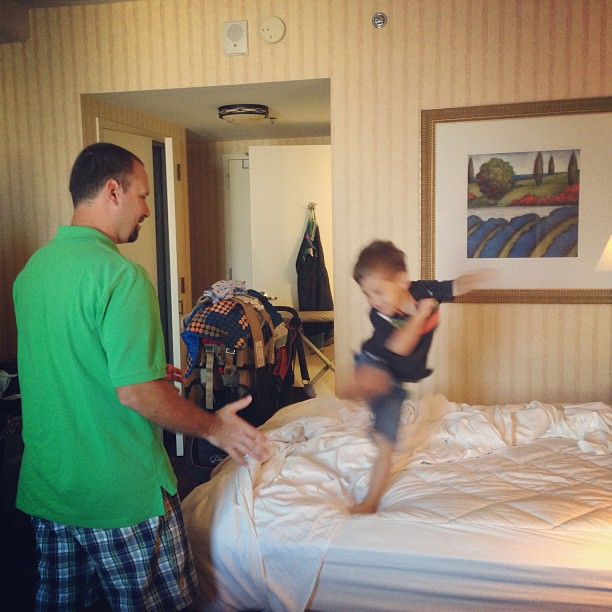