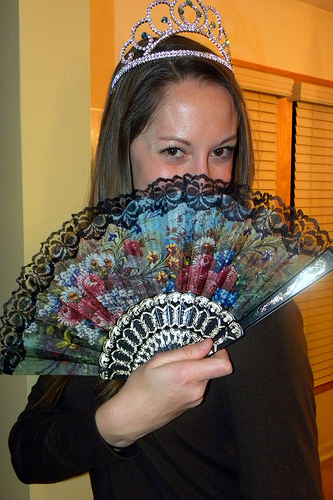 One of my best friends, Stephanie, turned 30 this month, so I wanted to throw her a surprise birthday party with a few of our girlfriends.  Here is a little information about Stephanie: Her family heritage is Spanish, she insists on my son calling her his "tía", she is already teaching him the Spanish language since the day he was born (7 weeks ago), and she visits her family in Spain about every two years.  Knowing this, I just had to make the theme of her party as Spanish Tapas, and honor Stephanie as the Spanish princess (hence the cute tiara crowning her head)!  As an extra bonus, Foodbuzz chose to sponsor this party as part of their monthly Foodbuzz 24, 24, 24 events along with 23 other Foodbuzz Featured Publishers.

For party favors, I ordered a variety of these beautiful Spanish hand fans at a very affordable price from Amazon.  They doubled as decorations for the party, which saved me a pretty penny.  The ladies loved the fans and had fun posing with them in photos. 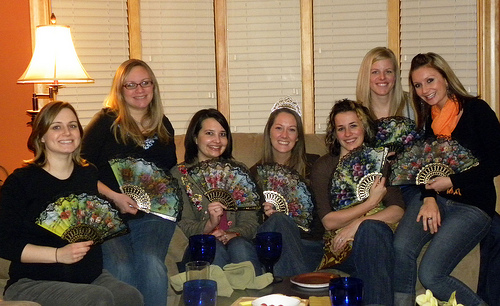 Another decoration and surprise to my friend were the following photos taken in Spain by the birthday girl herself!  One of Stephanie's hobbies is photography.  In fact, she did my maternity pictures which turned out awesome!  I asked her husband to give me the electronic copies to a few of the pictures she took on their trips to Spain, then ordered enlargements online at Costco.  Costco had the cheapest price and can have them done the same day so I picked them up at the store.  I bought poster frames and hung them randomly around the living room and dining room to see if Stephanie would notice they were her own artwork.  It took her a minute to realize it, but she was thrilled!  Shameless plug: If you like her work, you can view her gallery and purchase some of her photos here. 🙂 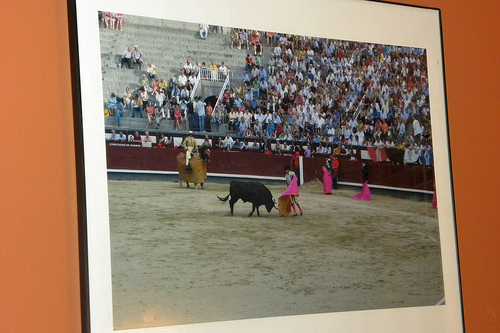 A photo of a Spanish bull fight Stephanie attended.  She shared a story with us that told us this was the worst bull fight she's ever attended. 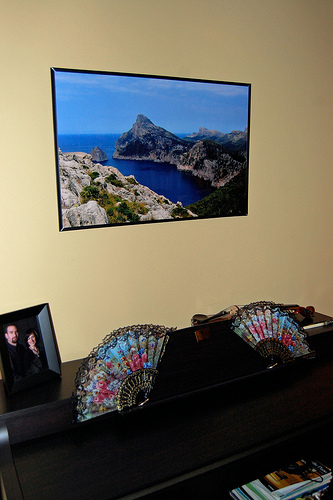 A Spanish landscape.  Stephanie saw this photo on the wall and didn't even realize it was one she took herself.  She looked at it and said "That is gorgeous!!"  I said "well, you took it!"  🙂 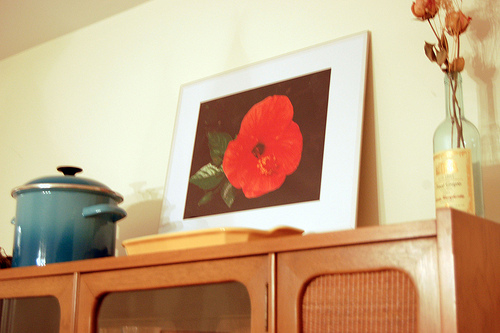 This one is blurry because of my lack of stability during taking this photo!  But, I can assure you the picture of the flower is beautiful! 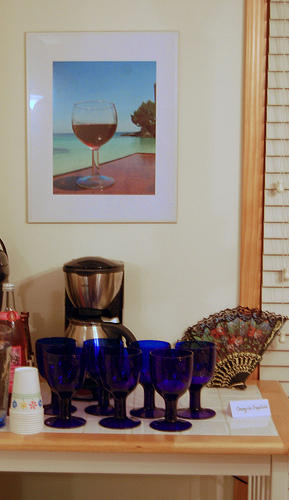 It only seemed appropriate to place this artwork of Stephanie's above the drinks table.  The pitcher of Sangria had yet to arrive. 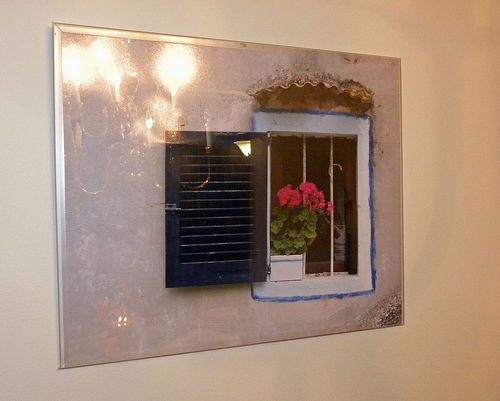 A Spanish window.  This one was taken by Stephanie's husband, as we could see his reflection in the photo!

To add to the Spanish ambiance, I purchased this flamenco music album from iTunes and played it continuously in the background on my iHome.  It's actually a great album that I've found myself playing while working at my desk, or relaxing to a good book.

Now on to the food! It was very fun for me to research and find traditional, yet do-able, tapas recipes for this party.  Since it was my first time making a tapas meal, I chose dishes that were fairly easy, yet impressive enough to create a special spread.  After experiencing this type of fun, I highly recommend that you plan a tapas party yourself.  Trust me, you can easily recreate this party food and impress your guests! Many of the dishes you can make or prep a day or two ahead so you can focus on other parts of the party, like hanging out with your fun guests! 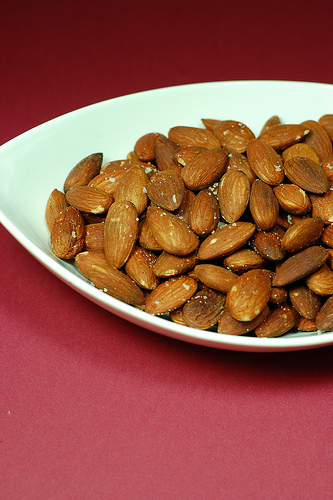 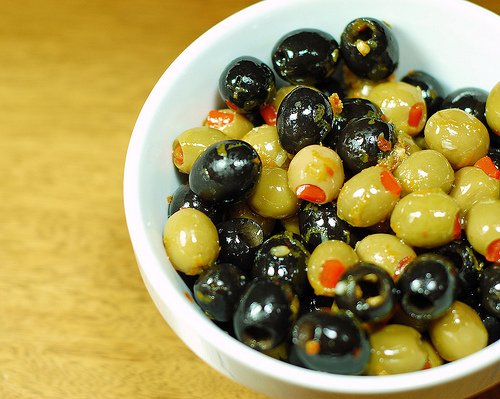 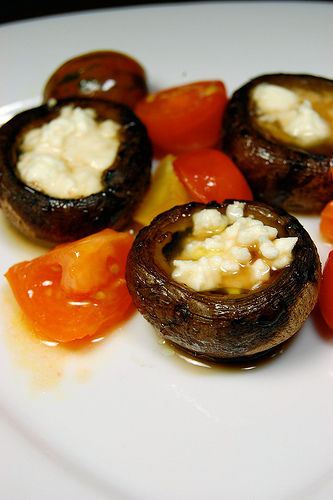 Feta-Stuffed Mushrooms with Multi-Colored Tomato Sauce - The mushrooms were the favorite of the night, and yet the easiest!  Just drizzle with olive oil and bake! 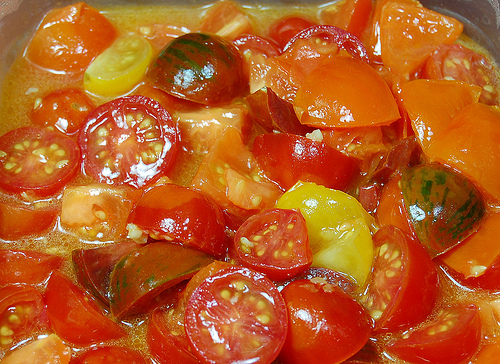 Top the Feta-Stuffed Mushrooms with this gorgeous tomato sauce, or eat them plain.  Even though I forgot to add the balsamic vinegar and basil leaves, I love tomatoes, so I still loved this sauce. 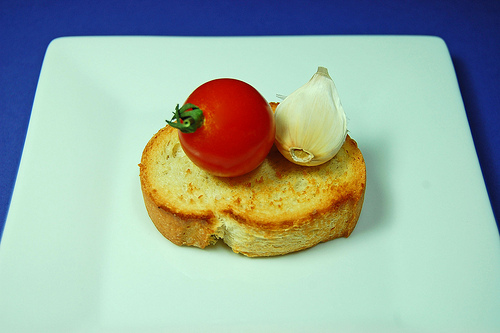 Stephanie's husband told me that her favorite tapas is Pan con Tomate, which is basically tomato bread.  However, the traditional way to serve it is by separating the ingredients (toasted bread, olive oil, garlic and tomatoes.)  Then, you take the bread, drizzle it with olive oil and rub the garlic and tomato on it. 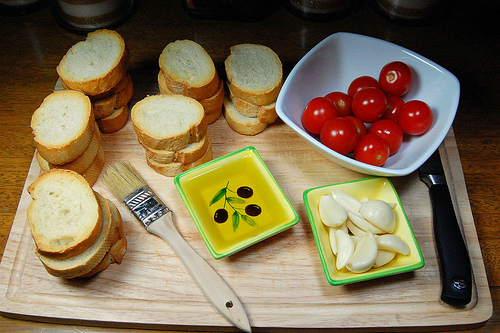 This is how I served the Pan con Tomate on the coffee table so guests could indulge as they arrived. 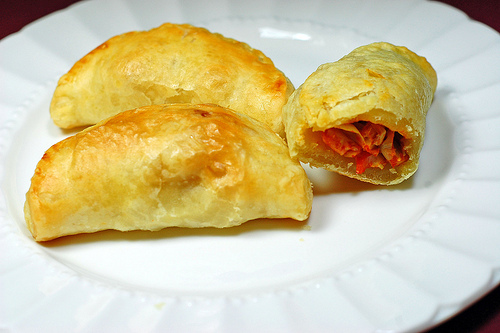 Cheese & Olive Empanadillas - Basically empanadas made from puff pastry.  The original recipe called for anchovies, too, but I substituted artichokes instead. 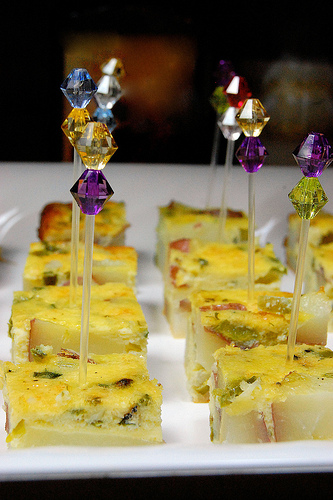 Oven-Baked Tortilla Española - When you hear tortilla, you may think of a tortilla wrap used in tacos and burritos.  A Spanish tortilla is basically a potato omelet.  Weird, I know!  The traditional way is to make this in a skillet.  But, it's very tricky so I decided to make this oven-baked recipe instead.  Stephanie said she grew up eating these...just like this! 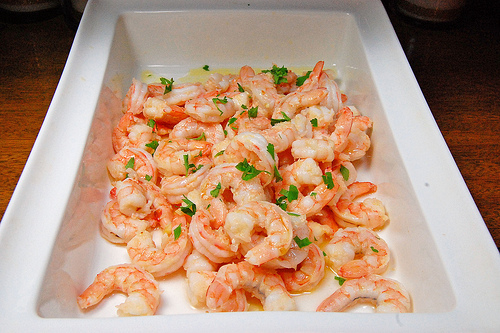 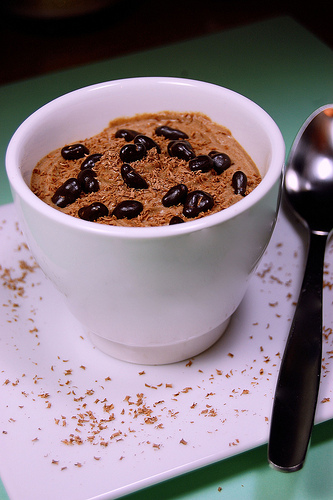 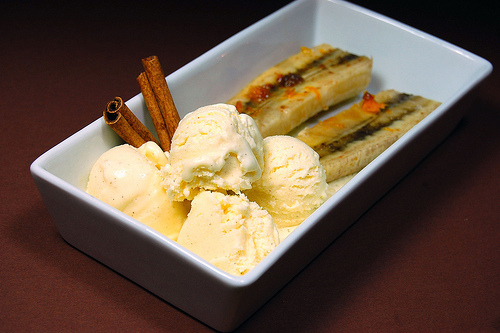 Plátanos al Horno with Cinnamon Ice Cream - Probably my favorite of the night.  The ice cream was so fantastic and creamy, and I love baked bananas.  These bananas were baked with brown sugar, orange zest and juice, and a little bit of butter.  Mmmmm...goodness!! 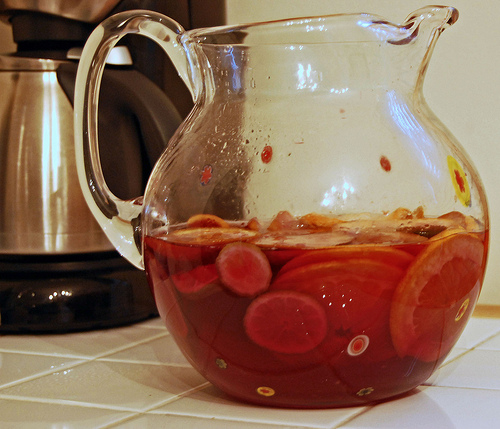 Sangría Española - You can't have a Spanish Tapas party without serving Sangría!  This recipe was shared by a Spanish co-worker of mine.  It was his grandmother's recipe who lived in Spain.

I'll be sharing the recipes with you in the next few weeks so that you, too, can plan your own tapas party!