You are here: Home / Uncategorized / Ham and PBDDL Glaze 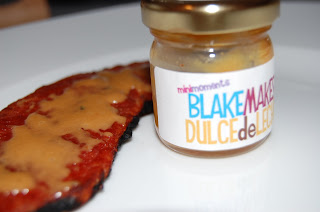 So most of my readers should now know about BlakeMakes. If you have not yet checked out his site, you might want to SOON and get in on the fun! Become a Sooper Hero and you won’t miss a beat!

I received my free jars of Peanut Butter Dulce de Leche last week and took some time deciding what to make with them. Finally, I used one jar yesterday when making dinner for me and Ben. I had some ham to bake and thought a nice sweet glaze would be perfect to balance out the ham’s saltiness. Boy, was I right! (A first for me!)

This really isn’t much of a recipe to share. Basically, I bought a 1 lb slice of partially cooked ham (since it’s only two of us) and baked it until it was cooked. Then, I put it under the broiler for a few minutes on each side and topped it with the PBDDL. The one mistake I made was putting it under the broiler again with the PBDDL. For some reason it charred the surface of the glaze, so I had to scrape it off (again, only the surface). But, it still left a nice amount of the glaze that wasn’t burned and tasted fantastic!

Even though the ham was a little tough (I slightly overcooked it) we still loved it, especially Ben. I give all credit to Blake’s PBDDL!

We’re the Gladd family!
Gather around as we experience joy and community at the table! END_OF_DOCUMENT_TOKEN_TO_BE_REPLACED