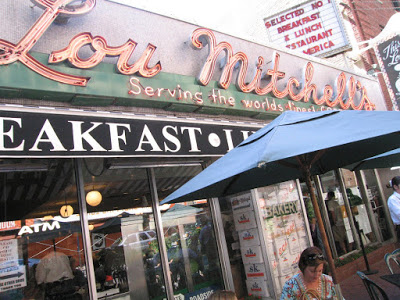 This weekend six girlfriends and I celebrated our friend's 30th birthday in Chicago. We saw Jersey Boys and had dinner at Cafe Ba Ba Reeba. Later, we enjoyed the Chicago nightlife then spent the night at the Hyatt Regency on Michigan Ave. It was a terrific day, especially the weather. The Chicago Air and Water Show was going on, so we got to see some aircraft flying overhead, including a stealth bomber!

The next morning before heading home, we had breakfast at one of Chicago locals favorite breakfast stops, Lou Mitchell's. It's on Jackson near the Sears Tower and has been in business since 1923! The cool thing about Lou Mitchell's is that the restaurant has not been updated in a long time, so it has an old-school nostalgia and the staff consists of genuine Chicagoans. When you are standing in line to be seated, the hostess hands you a donut hole (or three in my case today) and a box of milk duds. Then, after breakfast/lunch, you are offered complimentary homemade vanilla ice cream!

We were seated outside and our waitress, Candi, was so great! She offered to take two different pictures of us at the restaurant. On one, she stood in the middle of the street so that she could get the restaurant and sign in the background. 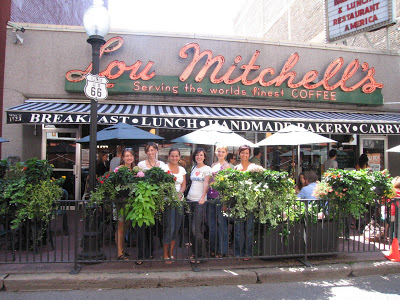 Then, she said she had another favorite photo spot where the Sears Tower is in the background. Priceless photos! 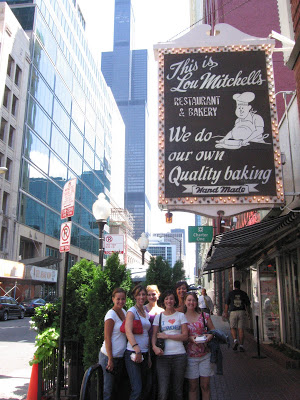 If you are in Chicago, you must stop at Lou Mitchell's. It's one of my newfound faves.