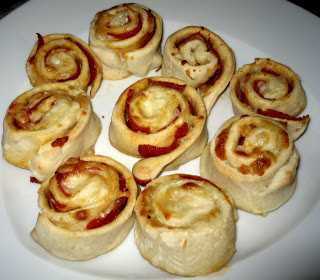 I'm thinking of calling these Pepperoni Sushi instead because that's what they look like before cooking them. Guess I'll stick with Pepperoni Rolls though.

When I was at my parents a few weeks ago, we had dinner at a restaurant called Old Chicago. My older sister, Angie, was also visiting the same time so she was with us. She was familiar with the restaurant and suggested the Pepperoni Rolls as an appetizer. And am I ever so glad she did! They are amazing!

Naturally, I thought to myself "Self, I need to make these. They must be simple!" And, yes, they are simple...and Cheap!

I've made them twice so far. The first time was perfect, but the second time I forgot about them in the oven because we had guests over and I was caught up in other things. So, they were a little too done. But, that was my fault. 🙂

Preheat oven to 350. Thaw the frozen bread in microwave. Separate into two. Take one half and roll into a rectangle (about 1/4" thick). Brush about a tablespoon of olive oil on top and sprinkle with garlic salt. Spread thin layer of pizza sauce and layer with pepperoni (I use a lot of pepperoni, but that's up to your own taste). It's probably best to cover the entire dough with pepperoni. Top with mozzarella cheese...to your liking. Roll the dough starting at a long side so the roll is long. Pinch seam together and turn roll so the seam is on the bottom. Cut into 1/2" rolls and place flat side down on lightly greased baking pan. Bake for about 15-20 minutes.

Repeat with other half of dough. Makes about 24 with full loaf.