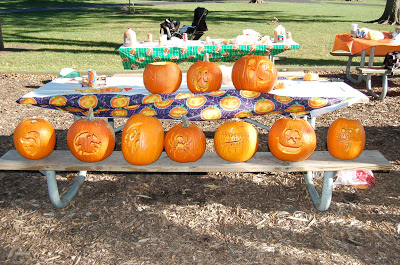 We had our 3rd Annual BYOP (Bring Your Own Pumpkin) Party yesterday afternoon. It started in 2005 a few months after we got married. I was asking Ben how he would like to celebrate his birthday with his friends, and he said he just wanted everyone to get together for a Fall party because he loves the fall season. He didn't want to announce it as a birthday party, though. So, we put our heads together and came up with carving pumpkins (because when do you really get to do that unless you have kids?) and then the guys would play football afterwards for fun. The first year was so much fun, we just had to keep the tradition.

ays include a lot of eating! We had about 35 people at our party this year, biggest yet! (50 rsvp'd, so of course I planned for way too much food). In the Evite, I asked everyone to bring their favorite fall dish to pass and I would supply the main dish, some sides, and drinks. My main dish this year were ham/turkey and cheese sandwiches with crustless bread cut out in the shape of pumpkins. I accomplished this by buying 6 loaves of bread

(equally white and wheat) then used a cookie cutter to cut out the pumpkin shapes. Then, I made my own platter of meat and cheese.. pics attached.

For a dessert, I used a recipe I wanted to try from this month's Real Simple magazine, called Pumpkin Cream Sandwiches. The original recipe only serves 8, so I quadrupled the ingredients to make more. These were a big hit! The cookies come out so soft...like muffins. In fact, I want to try this recipe for making muffins next.

My friend, Cathy, brought what everyone thought was an apple pie or cobbler, but then she told us that what we thought were apples were really zucchinis! Others brought veggie pizza, mini muffins, sugar cookies, chips, spinach dip, brie and crackers, and more.

The party was held at the park down the street, which was perfect because the kids could play on the playground equipment, there was a basketball court, and a huge open field for football, baseball, bocce, or whatever sport we would get into next. The weather was perfect, and we all really enjoyed ourselves. I'm already thinking about what I should make for next year! 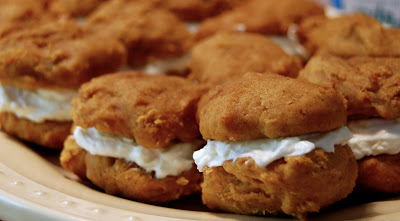 BEAT the butter, brown sugar, and granulated sugar in the bowl of an electric mixer fitted with a paddle attachment until smooth. Add the pumpkin, vanilla, and egg and beat until combined.

COMBINE the flour, baking powder, baking soda, pumpkin pie spice, and salt in a medium bowl. Slowly add the flour mixture to the sugar and butter and beat on medium-low speed until full incorporated.

SPOON heaping tablespoons of the mixture 2 inches apart onto parchment- or foil-lined baking sheets. Bake until puffed and cooked through, about 10 minutes. Let cool for 5 minutes.

CLEAN the mixer, then, as the cookies bake, beat the cream cheese, heavy cream, and confectioners' sugar until smooth and spreadable.

SPREAD the flat sides of half the coole cookies with the cream mixture. Top with the remaining cookies. 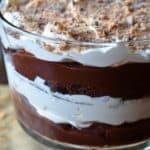 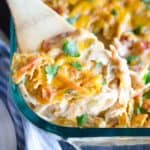