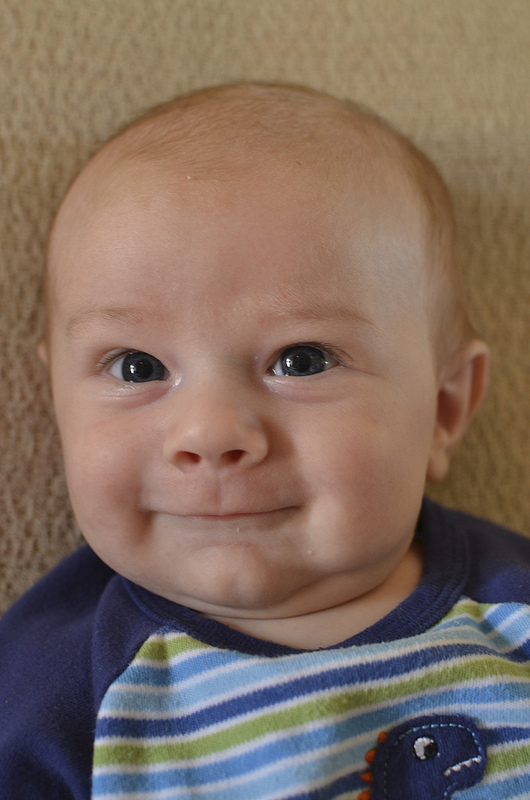 Simon is growing so quickly! How can I slow down time? #nevergrowupsimon

Last week he had his 2 month check up, shots and all.  We actually have to go back tomorrow for more shots, because I have this idea in my head that if my baby is given more than two shots during one visit, he will grow an extra arm or something.  Ok, so I don’t really believe that.  But, I once heard about a dog who was given multiple vaccination shots at one time and ended up with some sort of brain damage or heart failure or something that made him die shortly afterwards.  After hearing stories like that, you can’t help but compare your baby to a dog (right?) and then keep your pediatrician from giving him more than two shots.

Okay, maybe I’m a little bonkers on this one (the Doc certainly thought so…I could tell by his face) but, you must admit that when something like this is in your head, it’s hard to mentally block it! 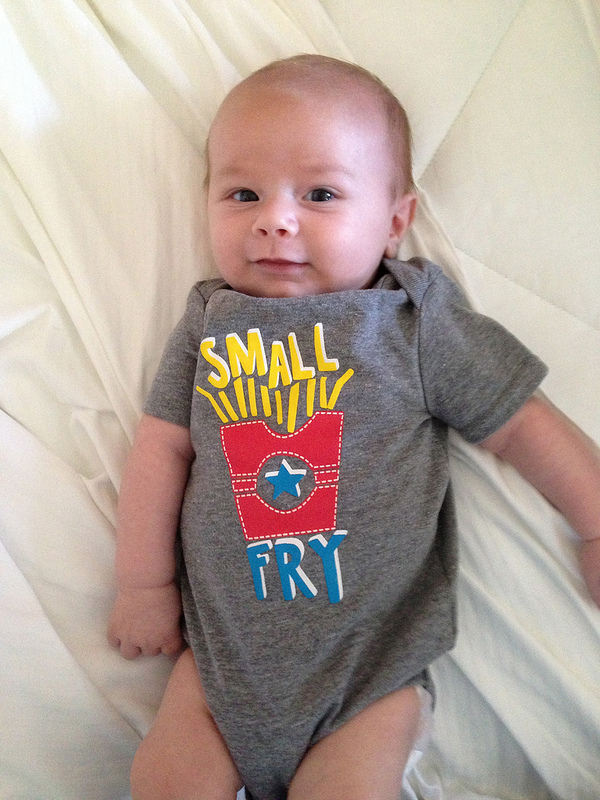 Therefore, two shots were given last week and one more shot plus an oral vaccination is on the books for tomorrow.

He did great last week.  Hoping for the same this week!

At his appointment, Simon weighed in just over 12 healthy pounds (12 lb 1 oz) which is the 60th percentile.  His height is looking pretty good, as well, at 23.5 inches, which is the 75th percentile.  Judah was always off the charts for height and weight, so this is a little smaller than we’re used to, but happy about it because I’m pretty sure I over-fed Judah. 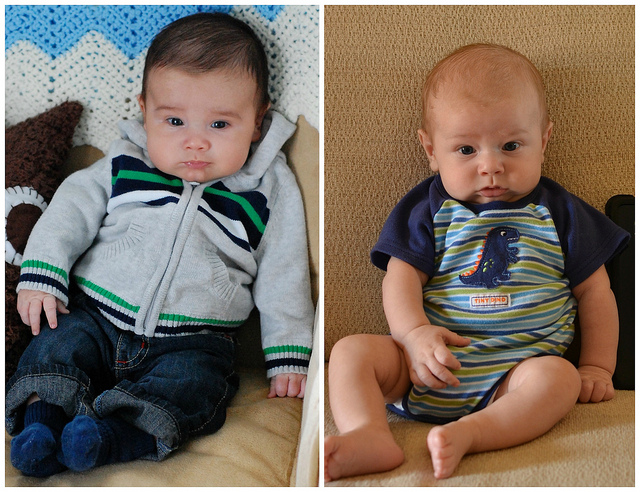 Speaking of… look at the comparison of our two kiddos at 2 months old.  Very different, yet very similar.  Same kid, different color?  😉

Yes, Simon’s hair does look reddish in some lighting.  Crazy!  Who’s kid IS this?!

The kid smiles a TON.  Seriously, earlier today I sat with him in my lap while he smiled and cooed at me for THIRTY minutes straight.  My heart is mush. 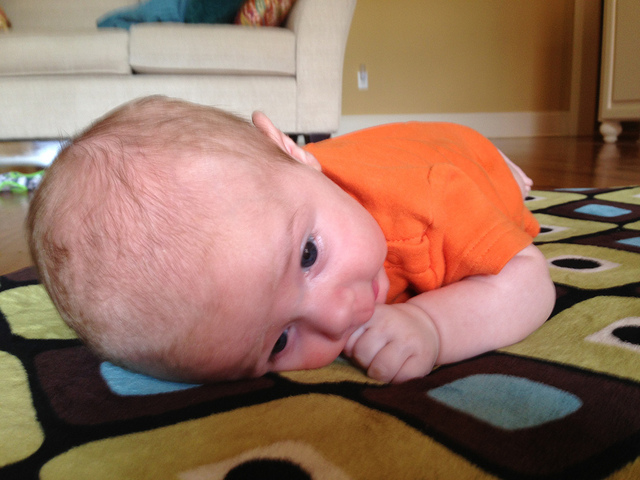 Tummy time doesn’t happen often, but I guess that’s not a problem because he rolled over TWO TIMES in a row today!  Ben told me he rolled over a couple of weeks ago when he was watching the kids and I was out doing who knows what.  (Probably grocery shopping.)  I think I blocked that out of my mind, though, because it never happened again and because I think I just didn’t want to believe that I missed out on one of his milestones.  But, he did it twice for me.  BOOM!

Check it out yourself:

Judah rolled over consistently starting at 5 days old!  Yeah, he’s partial Superman… probably why he has the dark features.

Which reminds me, Simon’s eyes are still blue.

They may be very different, but Judah and Simon sure do love each other! 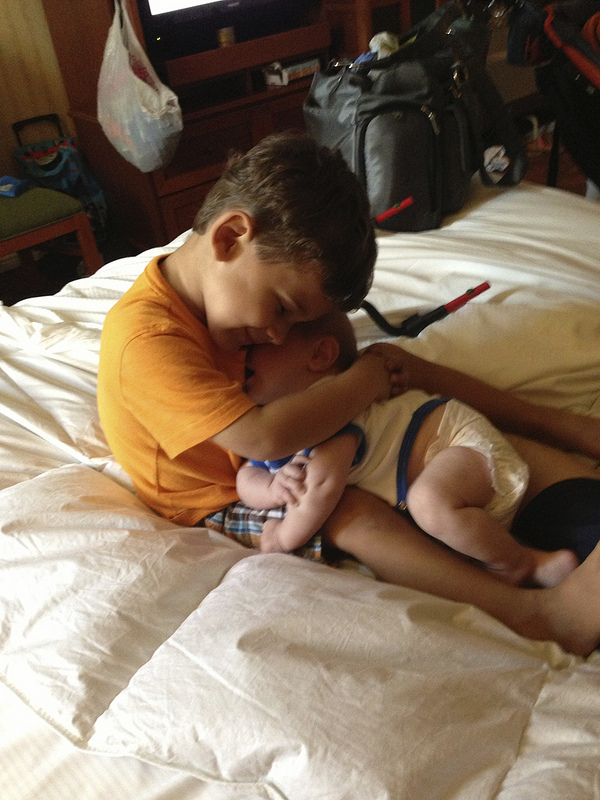 Update:  I forgot to share Simon’s sleeping and eating schedule information, for those of you who are interested.  I know it helped me with my first kid to be able to read and hear about others’ experiences.  Plus, it’s nice to have this journaled for me to look back on.  🙂

Simon is bottle fed.  He eats anywhere from 3 to 5 ounces every 3 to 4 hours, except during the night when he goes for a long stretch without a feeding.

Simon is actually sleeping like a champ, still.  You can read about his initial sleeping habits in his 1-month update where we had just started putting him down earlier (between 8-9PM) and he would wake around 2-3AM for a feeding, then again for the day around 5-6AM.  Well, this has improved immensely in the last couple of weeks.  We now put him down around 8PM and he’ll sleep 6-8 hours, usually waking at 3-4AM for a feeding, then he’ll wake up for the day at 7AM.  Pretty sweet deal!

If you are still putting your baby to bed at 11PM (or a later time than 8PM) then I’d suggest trying to put him down earlier.  This is why it works (and what a friend taught me when Judah was a baby…thanks Heidi!):  At about 7:30PM, “top him off” with a feeding.  Simon is formula fed, so I make about 2-3 ounces (depending on how long it’s been since his last feeding) to give to him and feed what he’ll take. Then, I put him down for the night.  I also make sure that I lay him in bed when he’s sleepy, but still awake so that he knows how to put himself to sleep.  This way, if/when he wakes during the night, he’s able to just fall right back asleep without needing me at all.

Simon has a pretty good sleeping schedule during the day now, too!  Yippee!!!  He naps around 9AM for about an hour, then again around Noon for a couple of hours (yes!) and then another hour nap sometime in between the afternoon nap and 8PM bedtime, depending on when he wakes from that afternoon nap.  🙂

I couldn’t ask for a better baby!!  Thank you, God!

We’re the Gladd family!
Gather around as we experience joy and community at the table! END_OF_DOCUMENT_TOKEN_TO_BE_REPLACED