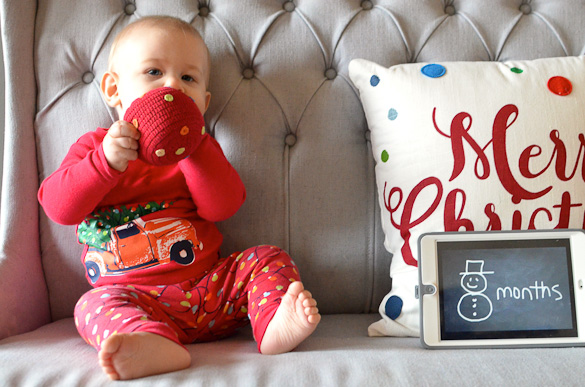 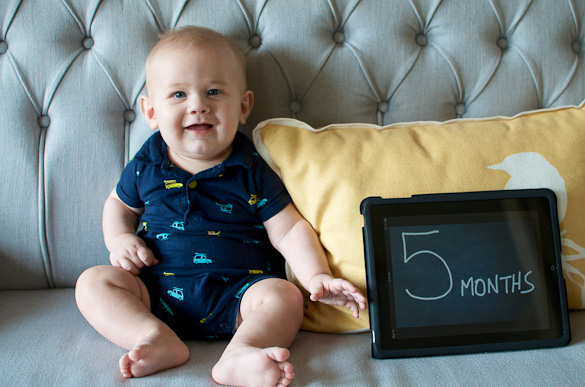 At 6 months, he started CRAWLING. 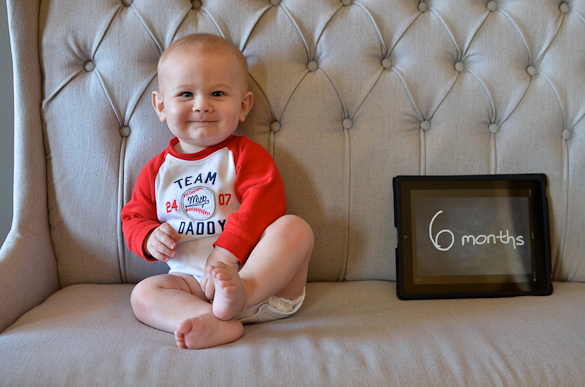 Now, he's pulling himself up to his feet and starting to cruise!  It's all over.  He even climbed up a step of our stairs about a month ago and can now climb halfway up!  What am I going to do??  This little guy is into EVERYTHING.  🙂 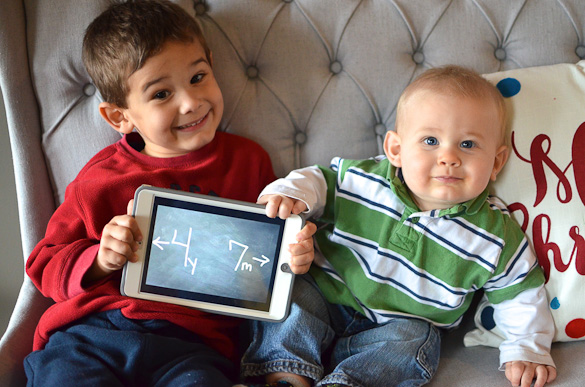 Over Thanksgiving (at 7 months), he learned to push himself to a sit-up position.  We're no longer concerned of him sitting up and falling over anymore. He's sturdy and in control! 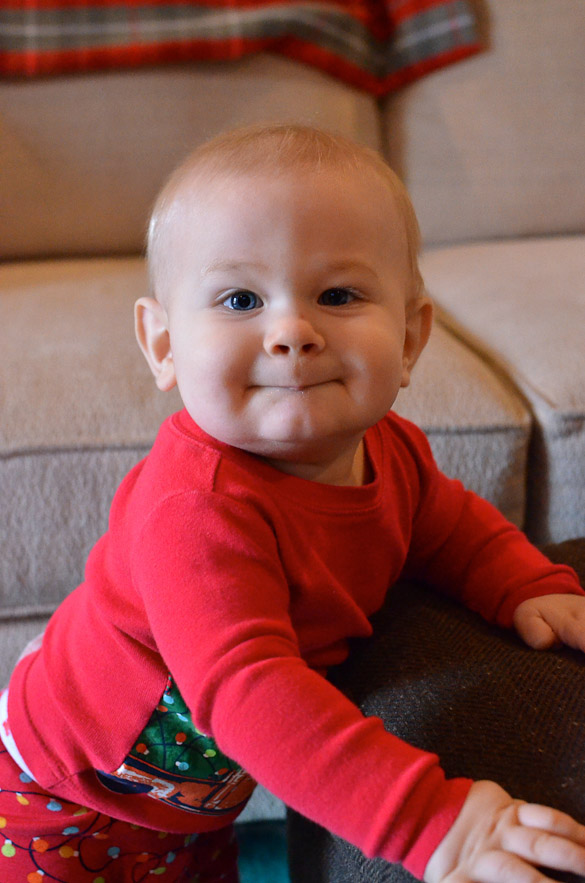 We took the kids to the Children's Museum two days after Christmas.  This was the first time where Simon could play and enjoy it, too.  I love this photo of him having a blast in the toddler area! 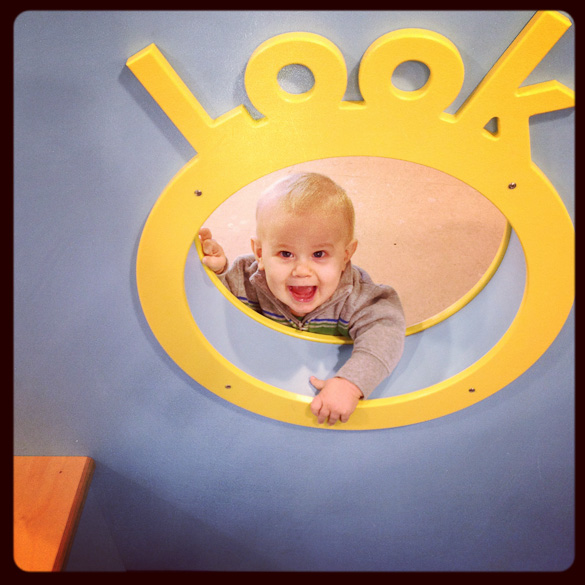 I've heard before that the second kid typically develops faster than the first, because he has a sibling to keep up with.  It's true, people!  Simon is ready to start walking.  You can tell he wants to... he's trying.  Oh no!  He's also at that stage where he will NOT lay still while we change his diaper.  It is so completely and utterly frustrating.  My new trick to keep him from rolling over while we try to change him?  Singing "bibbity bobbity boo" over and over and over...along with a little bit of beat-boxing.  You would love to be a fly on my wall, wouldn't you?  😉

But, as active as he is, Simon is still super sweet and happy.  He is making all of those joyful screeching noises, along with new sounds (you know, "dadadada") from his mouth.   He no longer sucks on his two fingers all of the time, but he does seem to throw a few fingers in his mouth when he is super happy.  Ben was the one who noticed that.  Super cute. 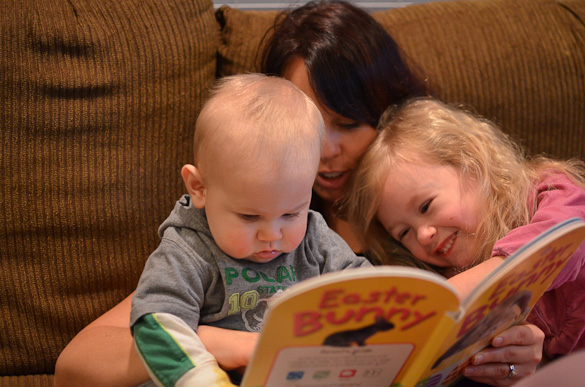 He loves books (pictured above: reading with Auntie Heather and cousin Avery).  His favorite book right now is Brown Bear, Brown Bear, What Do You See?  Seriously, when he sees me pick it up from the bookshelf, he gets super excited and starts bouncing and smiling.  Judah can even "read" it to him! 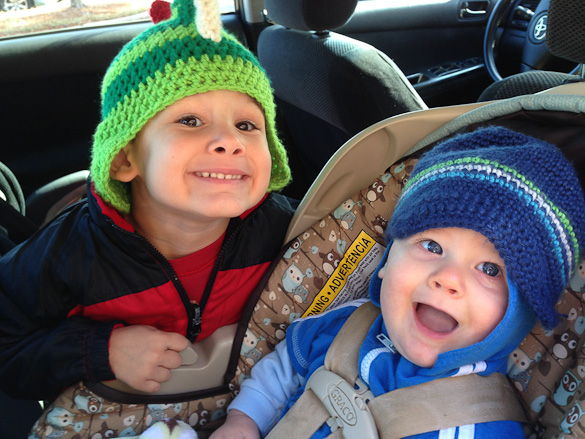 Judah continues to be the best big brother ever.  He always wants to be the first one in Simon's room when he wakes up.  He'll hop in his crib and play with him, which is great because it buys me a little more time before I have to go in and get him.  Thanks, Judah! 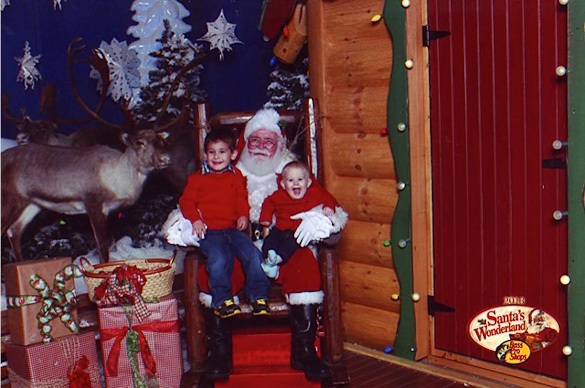 My favorite thing about Simon right now?  Well, two things that go hand in hand.  He is VERY ticklish... which means he smiles A LOT.  And, I love his big smile.  He even showed it to Santa. 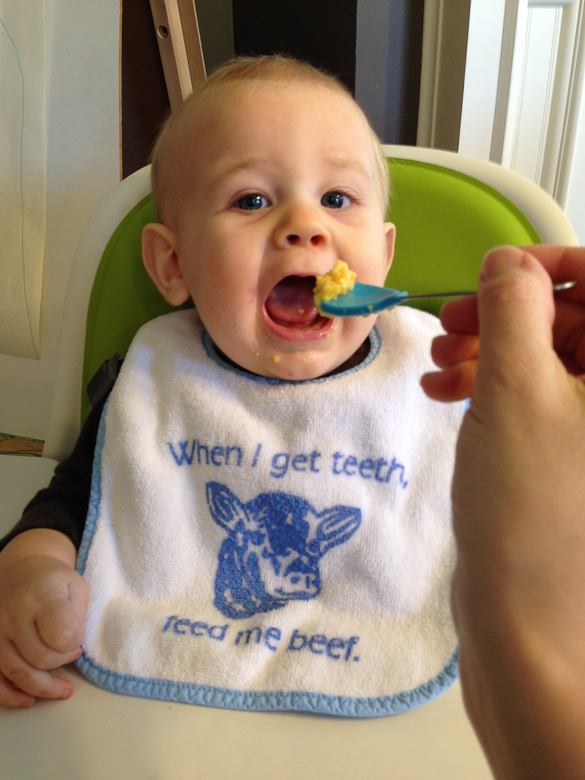 I can't remember if I mentioned it before, but around 3-4 months, Simon was already holding his own bottle.  Lately, he's been even better at feeding himself.  I get a little teary thinking about how fast he's becoming self-sufficient! haha!  He will always need his mama, though, right?  RIGHT!? 😉

He is eating table food and loving it.  I have a nifty little baby food grinder where I can grind up what we are eating and serve it to him.  Cuts down big time on the cost of baby food.  (I made Judah's baby food, but this time around there is just no time for that.)  😉  But, I am glad to be able to give Simon mostly what we are eating now, as long as it's not spicy and doesn't include an ingredient babies can't have. 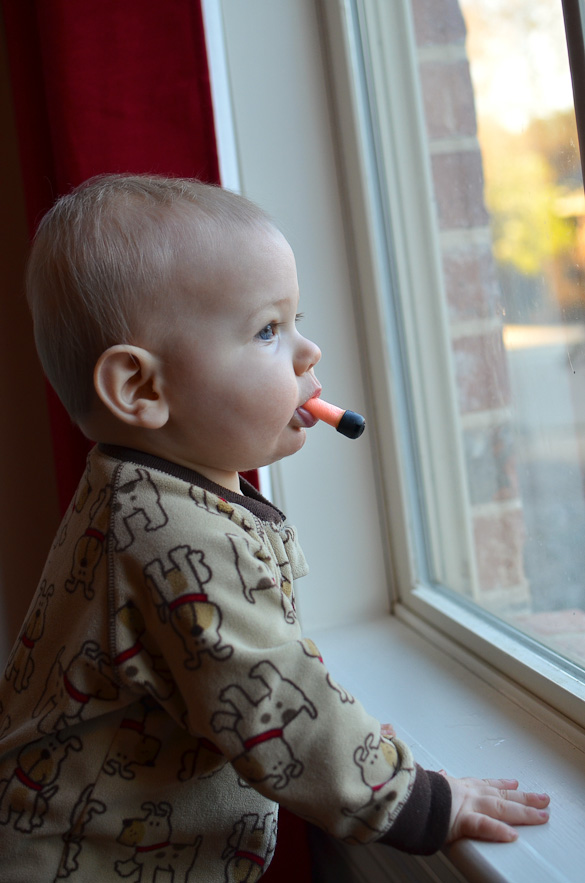 Although he doesn't yet have teeth (Judah didn't have his first two until 11 months, so no surprise here), Simon is showing signs of teething.  He especially loves to chomp on Judah's Nerf toys.  He tends to find them and just keeps them in his mouth like he's smoking a cigarette.  Hysterical, but I take them away every time so he won't choke (no worries mommies!).  He also loves munching on those baby puffs and Mum-Mums.  Don't know what I'm talking about?  Look them up.... they are wonderful for keeping a baby busy for a few minutes.  🙂

Between meals, he also still has his 6 ounce bottles every 3-4 hours.  He is in love with his bottle, but I am planning to take it away from him the day he turns one, just like we did with Judah.  And, with Judah it was no big deal...at.all.  Simon, on the other hand, seems to be more attached.  We'll see how that goes in ...4 months?!

Simon is just over 20 pounds and wearing 12 month clothing.  He's a big SOLID boy!  His hair is still blonde and eyes are still very blue. 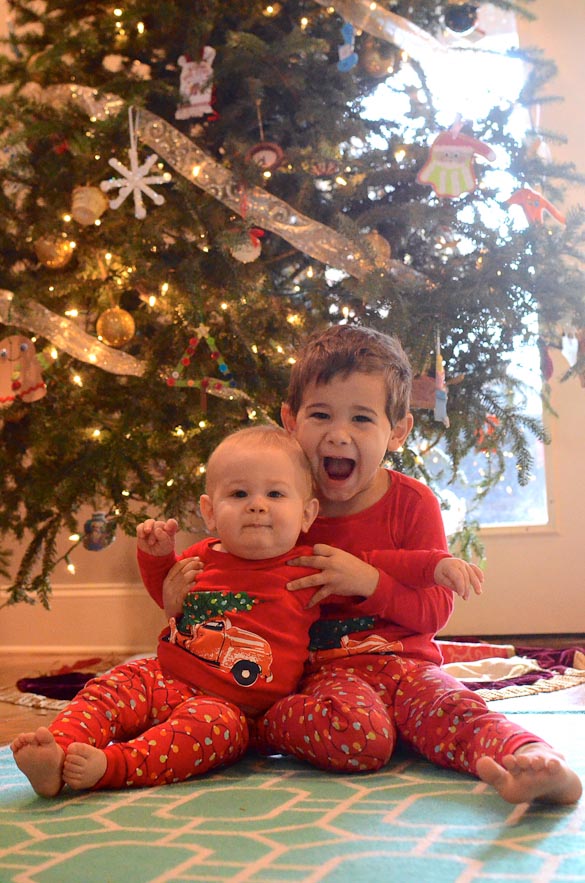 Keeping it real... having two children is a tough job.  I give total props to those who have even more!  Ben and I are completely worn out at the end of each day.  We're often trying to find ways to spend up time with the kids, and are mentally exhausted from the constant chatter of Judah.  The things he says are hilarious and bring us such joy, but sometimes I sort of wish I could put a muzzle on that kid! 😉

However, with Simon getting a little older, it is really helping.  The kids can now play together quite a bit (Simon's favorite room is Judah's room), and Judah is great with making sure Simon stays away from putting small toys in his mouth.  I don't rely on Judah completely, but it is nice to be able to leave the room for a few minutes knowing Simon will be just fine. 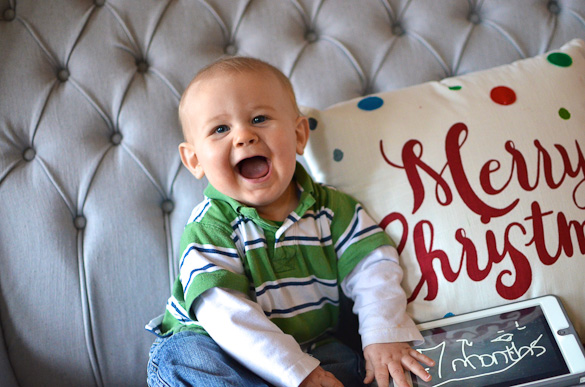