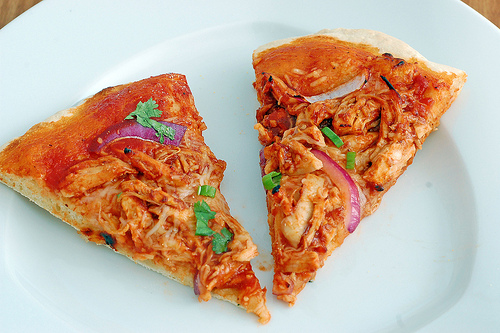 My college cafeteria first introduced me to BBQ chicken pizza. At first I didn't understand.  BBQ sauce and chicken on my pizza?  What was this?? Why were so many of my peers so excited to see it on the menu?

You see, I must have lived a sheltered life when it came to pizza. It took me a while to branch out from just a pepperoni topping.  Until college, I was drawing the line at pineapple and ham.  Little did I know that other concoctions would soon rock my world.

As far as the BBQ chicken pizza...It was love at first bite.

Place pizza stone in the lower third of the oven. Heat the oven to 500˚ for at least 30 minutes. Shape the pizza crust dough and transfer to a pizza peel or sheet of parchment paper dusted with semolina or cornmeal.

In a small bowl, stir together the chicken and 1/4 cup BBQ sauce; set aside.

In another small bowl, mix the tomato sauce with the remaining 2 Tbsp BBQ sauce.  Spread the mixture evenly on the pizza crust.  Sprinkle with 1/2 cup cheese.  Next, layer the chicken and red onions, then top with remaining 1/2 cup of cheese.

Slide the dough onto the pizza stone. Bake for 8 to 12 minutes.

Garnish with green onions and cilantro.