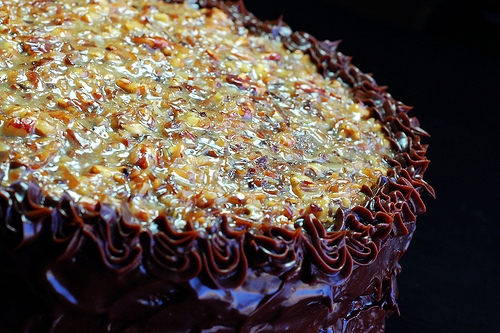 I'm leaving you this weekend with this absolutely decadent recipe for German Chocolate Cake. Ben's family (his parents, brothers and their wives) were in town a few weekends ago to see our little Judah. Since we were all together, we also took the time to celebrate his dad's birthday. I decided to make him German Chocolate Cake after I found out it is one of his favorites.

I didn't want to make just any old, simple, mediocre German Chocolate Cake.  Instead, I searched high and low for the perfect recipe.  Actually, it didn't take me that long to come across this one from David Lebovitz' blog.  Since I can never seem to go wrong with his recipes, I figured this was "the one."  And, yes, it really was.

One of Ben's brother deemed this cake as "the best German Chocolate Cake I've ever had."  His dad couldn't stop talking about it, and his other brother dished himself a second serving around midnight, then a third for breakfast the next morning!  I think these testimonies alone give you an idea of how great this cake is!

Just a warning - be prepared to dirty a bunch of your mixing bowls, utensils and pans.  The steps may seem intimidating at first, but if you have a couple of hours to spare, you'll be just fine.  It really isn't hard, just a little bit time consuming.  But, with a syrup that keeps this cake so deliciously moist, it's completely worth it!

Makes: One double tiered 9-inch cake that serves 12 to 14

Cake:
For the cake, preheat the oven to 350˚F.  Butter the bottom and sides of two 9-inch cake pans.  Line the bottoms with parchment paper and set aside.

Using a double boiler or a heat proof bowl over simmering water, melt the two chocolates together with the 6 Tablespoons of water.  Stir until smooth, then set aside and cool to room temperature.

While waiting for the chocolate to cool, beat the butter and 1 ¼ cup of the sugar in the bowl of a stand mixer, fitted with the whisk attachment. Beat at medium speed until light and fluffy, about 5 minutes. Stir in the melted chocolate.  Add the egg yolks, one at a time.

In a separate metal or glass bowl, beat the egg whites until they hold soft, droopy peaks. Beat in the ¼ cup of sugar until stiff peaks form.  To lighten the cake batter, gently fold in one-third of the beaten egg whites, using a rubber spatula.  Fold in remaining egg whites until just combined.

Divide the batter evenly into the two cake pans.  Lightly tap the bottom of pans on counter top to smooth the tops.  Bake for about 45 minutes, until they pass the toothpick test.

Remove from oven and cool in the pans.  After about 10 minutes, remove from pans and allow to cool the rest of the way on wire racks.

Filling:
To make the filling, mix the cream, sugar and egg yolks in a medium saucepan.  Stirring and scraping the bottom constantly, cook over medium heat to 170˚F (until the mixture begins to thicken and coats the spoon).

Mix the butter, salt, coconut and pecans in a large bowl. Pour the hot custard immediately into the pecan-coconut mixture and stir until the butter is melted. Cool to room temperature.  The filling will thicken as it cools.

Chocolate Icing:
In a small bowl, mix the 8 ounces of chocolate with the corn syrup and 3 Tablespoons of butter.

In a small sauce pan, heat the cream until it just begins to boil. Pour over the chocolate and let stand for one minute. Stir until smooth; set aside and let cool to room temperature.  Cool in fridge to slightly thicken, for half an hour (no more!).

Syrup:
Heat the sugar and water in a small sauce pan until sugar is fully dissolved. Remove from the heat and stir in the rum (optional). Set aside.

Assembling the Cake:
Slice both cake layers evenly in half horizontally, using a serrated bread knife or cake leveler. Set one cake layer on the cake plate, cut side up.  Brush well with syrup. Spread ¾ cup of the filling over the cake layer, making sure to reach the edges. Set the second cake layer on top and repeat for the rest of the layers.  Top with coconut filling.

Place pieces of wax paper underneath the cake to protect the plate while icing. Spread the icing on the sides of the cake, then remove the wax paper. Place frosting back in fridge until just thick enough for piping decorative border. (Watch carefully so it doesn't thicken too much!) Using a pastry bag with a star tip, pipe the border on top and bottom (if enough frosting).