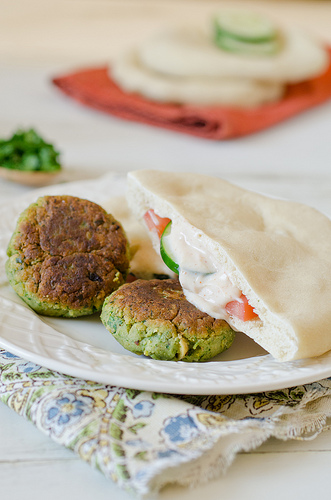 Don't you dare close your computer window right now just because you were scared off by "falafel" in the title.  In fact, I am begging you to try this recipe before you write it off.  Some of you are already familiar with falafel and love it.  But, I know many of you have never heard of it, or you've heard of it and think "ewww, gross, what is that!?"

I was that terrified person once.  In fact, I remember when my brother-in-law was moving a few years ago, he was purging a bunch of food in his house where we ended up with some of it.  One of the items was a box of falafel mix.  I tossed it in the back of our pantry until I discovered it again way past its expiration date.  I had no idea what falafel was, and I wasn't going to try something with such a funny name. It went in the garbage.

Fast forward to our time in California where I grew very fond of Middle Eastern food, thanks to this little hole-in-the-wall gem. Now we live away from it and I can't seem to find anywhere comparable in Mississippi.  Instead of wallowing in my dispair ;), I am taking it as an opportunity to learn how to make more of this type of cuisine in my own home. 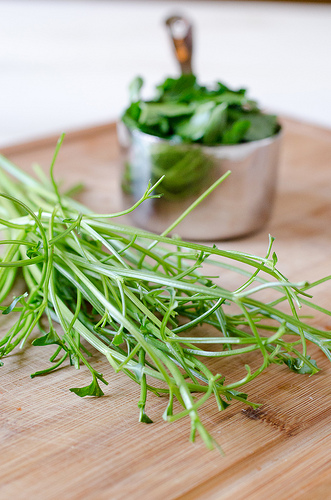 Falafel is made up of ground chick-peas (or fava beans) mixed with other ingredients such as parsley, scallions, garlic and other spices.  Traditionally deep-fried, in this recipe we lightly fry them in a thin layer of oil.  They can be shaped in round balls or discs.  I like the disc option so when frying I only need to flip it once.

Believe it or not, this is an excellent choice for a daytime lunch or a quick weeknight meal. Whip up the yogurt sauce (which is extraordinary!) and let it chill while assembling the falafels, which only consists of throwing the ingredients in a food processor, forming into discs and frying.  Simple as that!  Of course, you will also need to slice up your tomatoes and cucumbers, but who can't do that in 30 seconds flat?  😉

*Side note #1:  The pita bread pictured is indeed homemade, however, I am not yet ready to post the recipe as I haven't quite perfected it yet (even after three times of trying the same recipe).  Soon, though! 🙂

*Side note #2:  I've included this in the Appetizers category because I think the falafel with the yogurt sauce would make quite an impression as a starter course or served at a party. 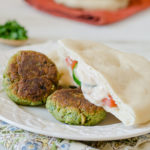 For the Spicy Yogurt Sauce:

For the Spicy Yogurt Sauce: