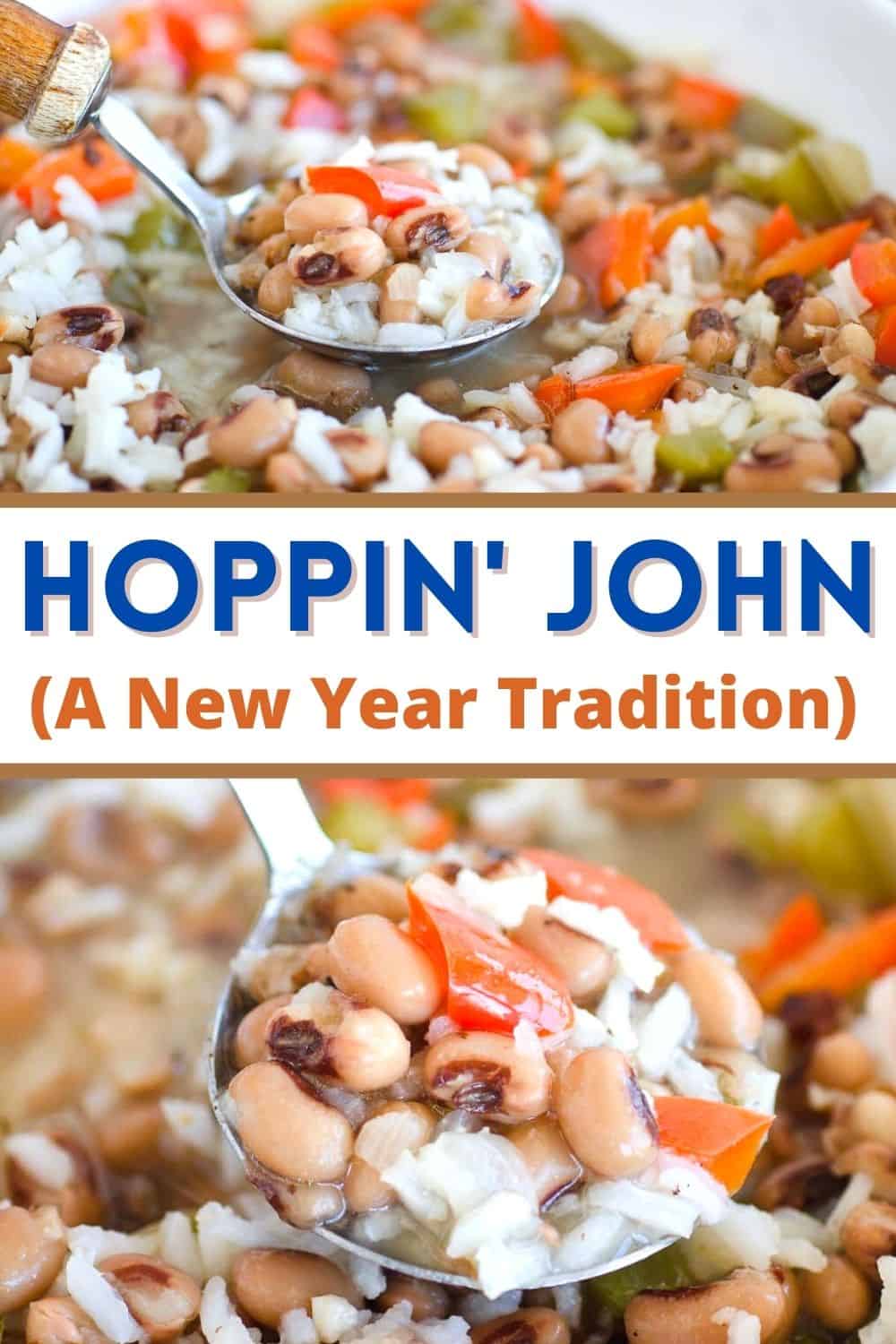 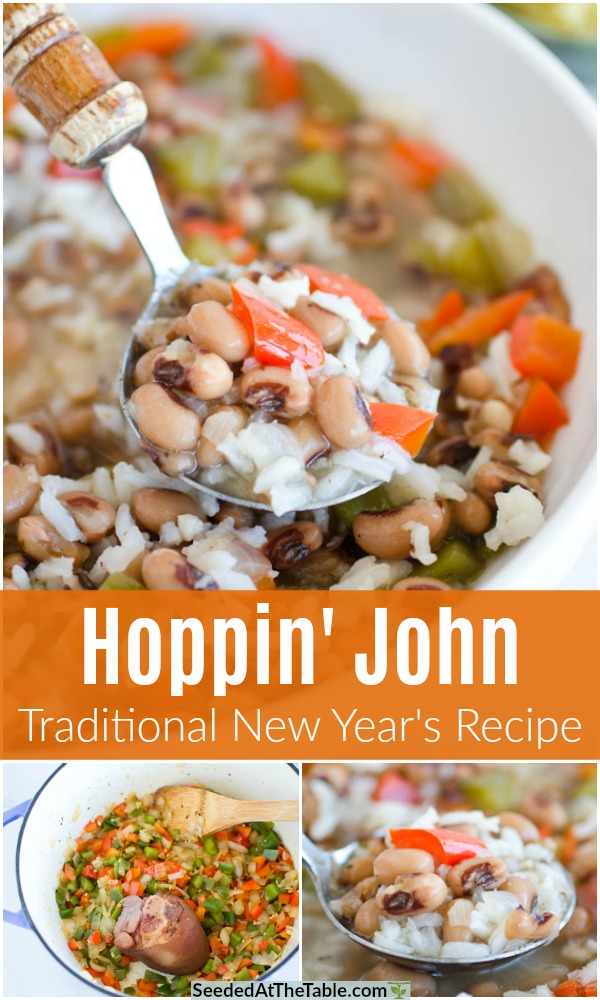 Hoppin' John is a Southern tradition for new years dinner with black eyed peas and rice.  Made with a smoky ham hock or salt pork, this black eyed pea soup is believed by some to bring good luck!

I did not grow up in the South, but we've lived in Mississippi for almost 10 years so we've adopted some of the fun southern traditions.  For example, I make beignets and king cake once a year around Mardi Gras, and words like "y'all," "fixin,'" "might could," "cattywampus," and "hankerin'" have become part of my natural vocabulary. 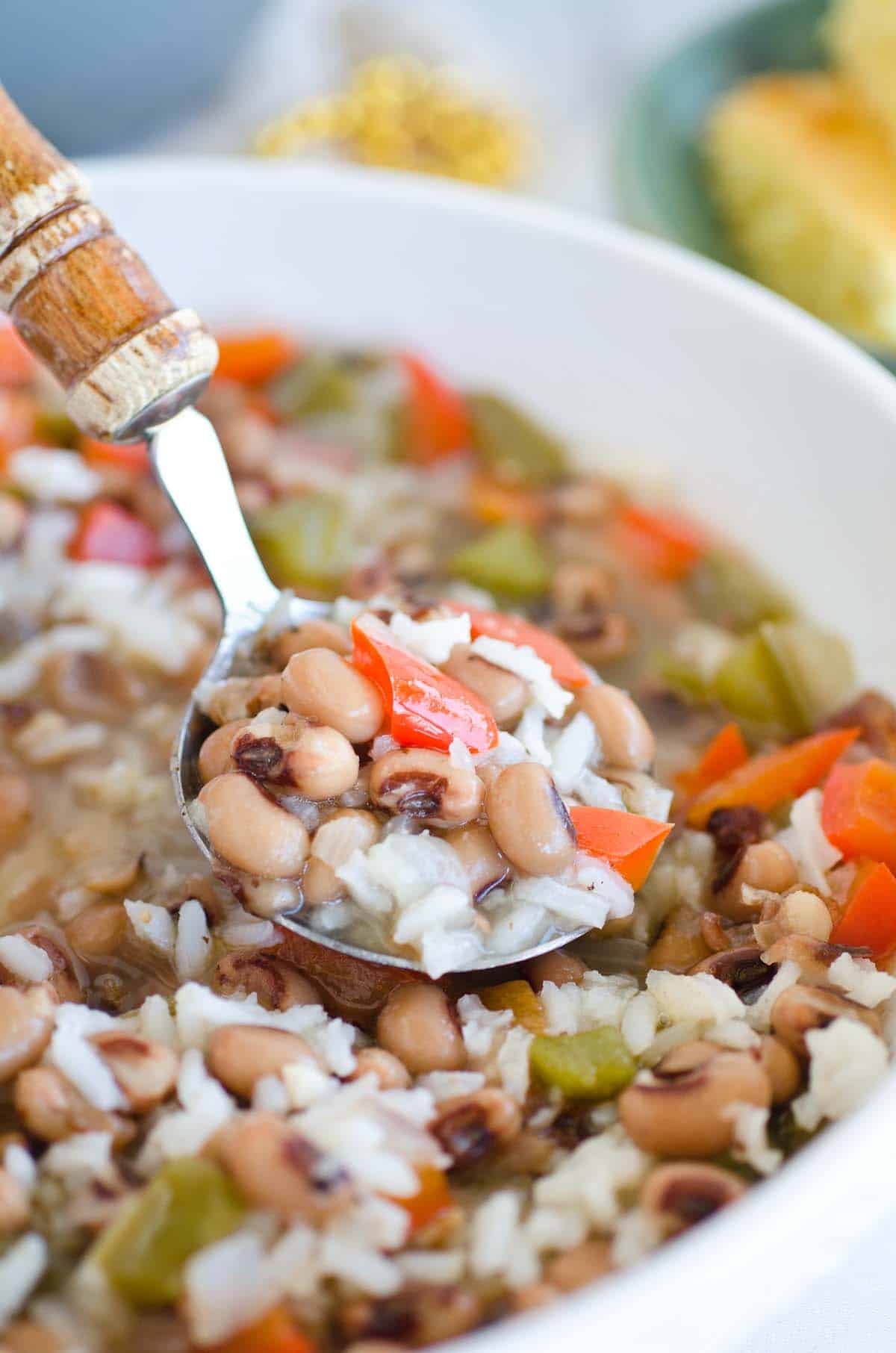 This peas and rice recipe has roots in West Africa and the black-eyed peas resemble coins that are said to bring good fortune. There are varying stories of how many peas to leave on your plate to either share your luck or avoid bad luck.  I also know that this hoppin' John is a very tasty soup!

Why is it called Hoppin' John?

There is a story for why this black eyed pea recipe is name Hoppin' John. Click here for a quick Google search to find an answer quickly, but y'all might could leave me an explanation in the comments below instead.

Click here or scroll to the recipe card at the end of this post for full recipe ingredients and instructions.

What is Ham Hock and Where Can I Find It?

Ham hock is a salty and smoky meat addition to this soup.  I find ham hock packaged in the meat department and it's not terribly expensive.  But, you can also use salt pork that is found by the diced ham and deli meats (at least in my grocery store).

The ham hock may come packaged with more than you need.  Use the one closest in size and freeze the others in a freezer bag to use another day. Also, you can see in the photo above I love using my favorite Dutch oven for this dish!

How to Make Hoppin' John 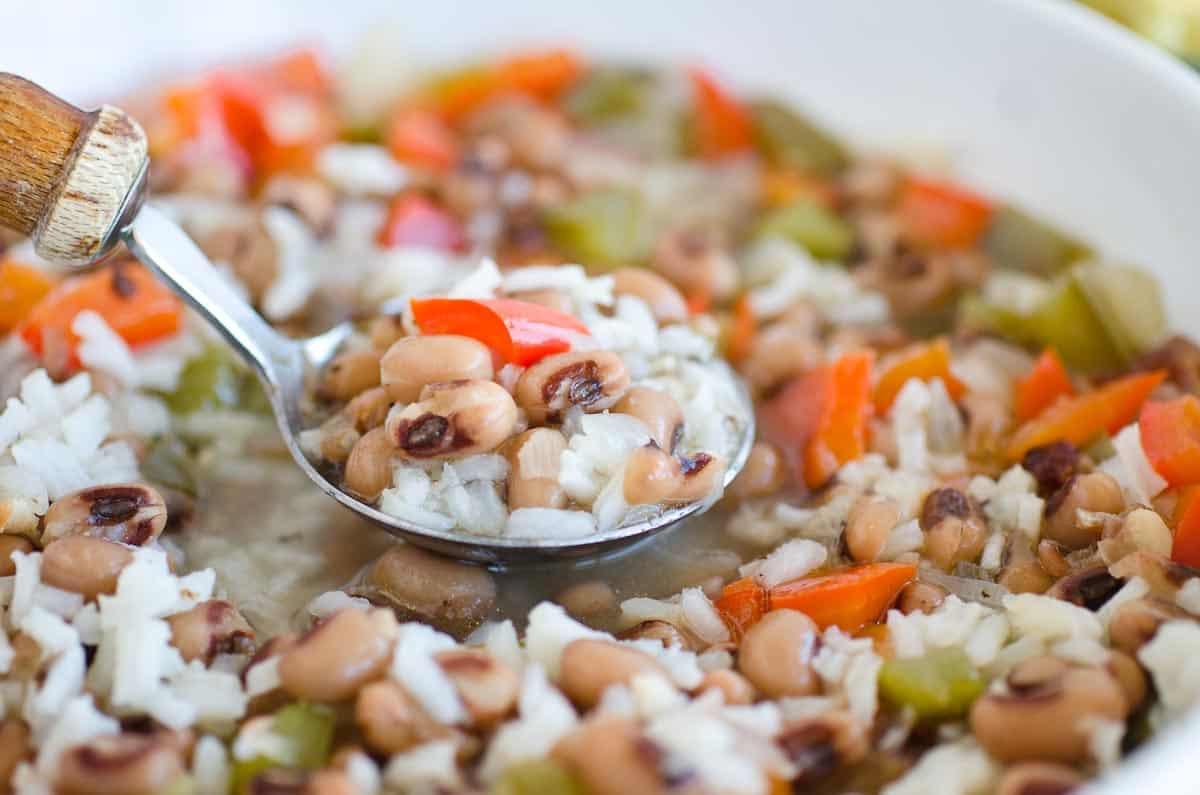 What is the difference between Hoppin' John and black eyed peas?

Some may not call this soup, but that's how I like to serve it.  Others will serve it over a bed of rice, but I stir the rice right in and ladle it all into a bowl to slurp down.  Even though it's tradition to eat hoppin' John on New Years Day, this dish is delicious year round. 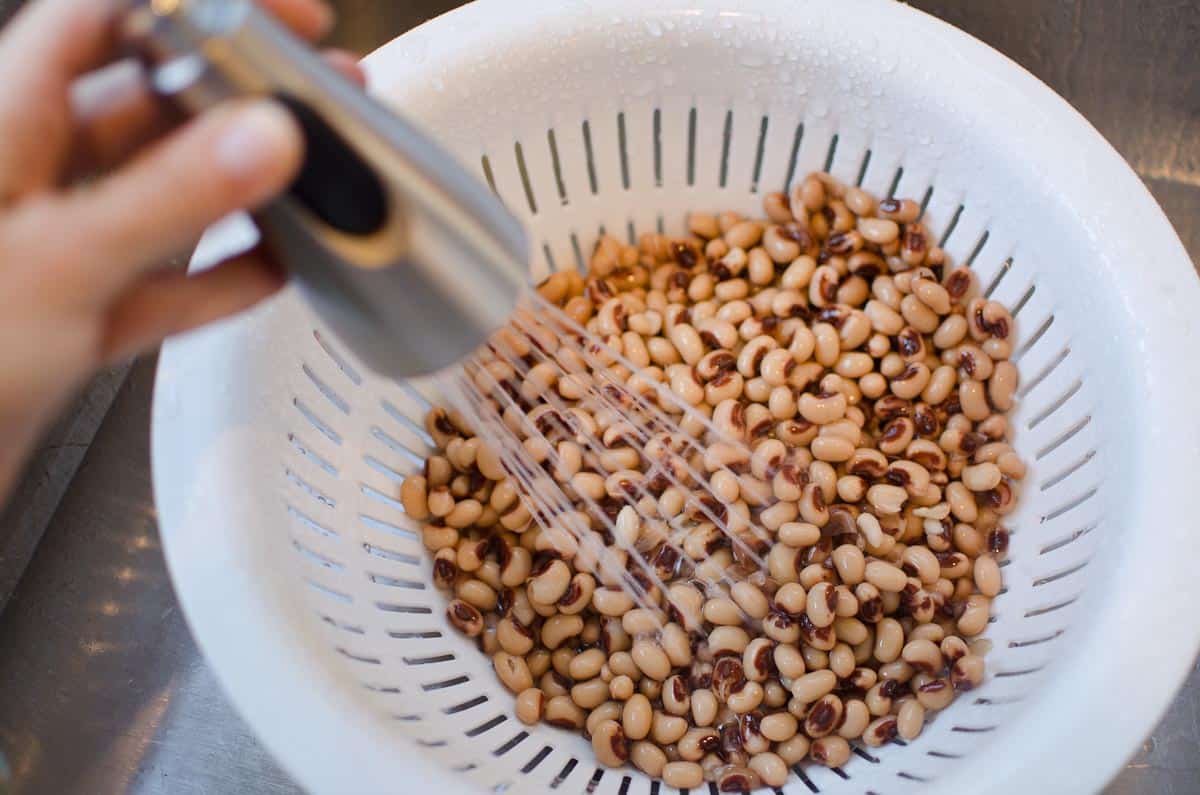 For the best hoppin' John recipe, follow these tips:

What to eat with Hoppin' John

I prefer to serve hoppin' John as a soup which means I just serve it with a side of cornbread.  If you serve it on a plate over a bed of rice, you can also add in a side of collard greens!

Store: Let the leftovers cool to room temperature and then transfer to an airtight container. Store in the refrigerator for up to 1 week.

Freeze: You can freeze leftover hoppin' John in a freezer bag up to 1 month.

Reheat: Reheat refrigerated leftovers in the microwave or on the stove. For frozen leftovers, allow to thaw overnight in the fridge first. 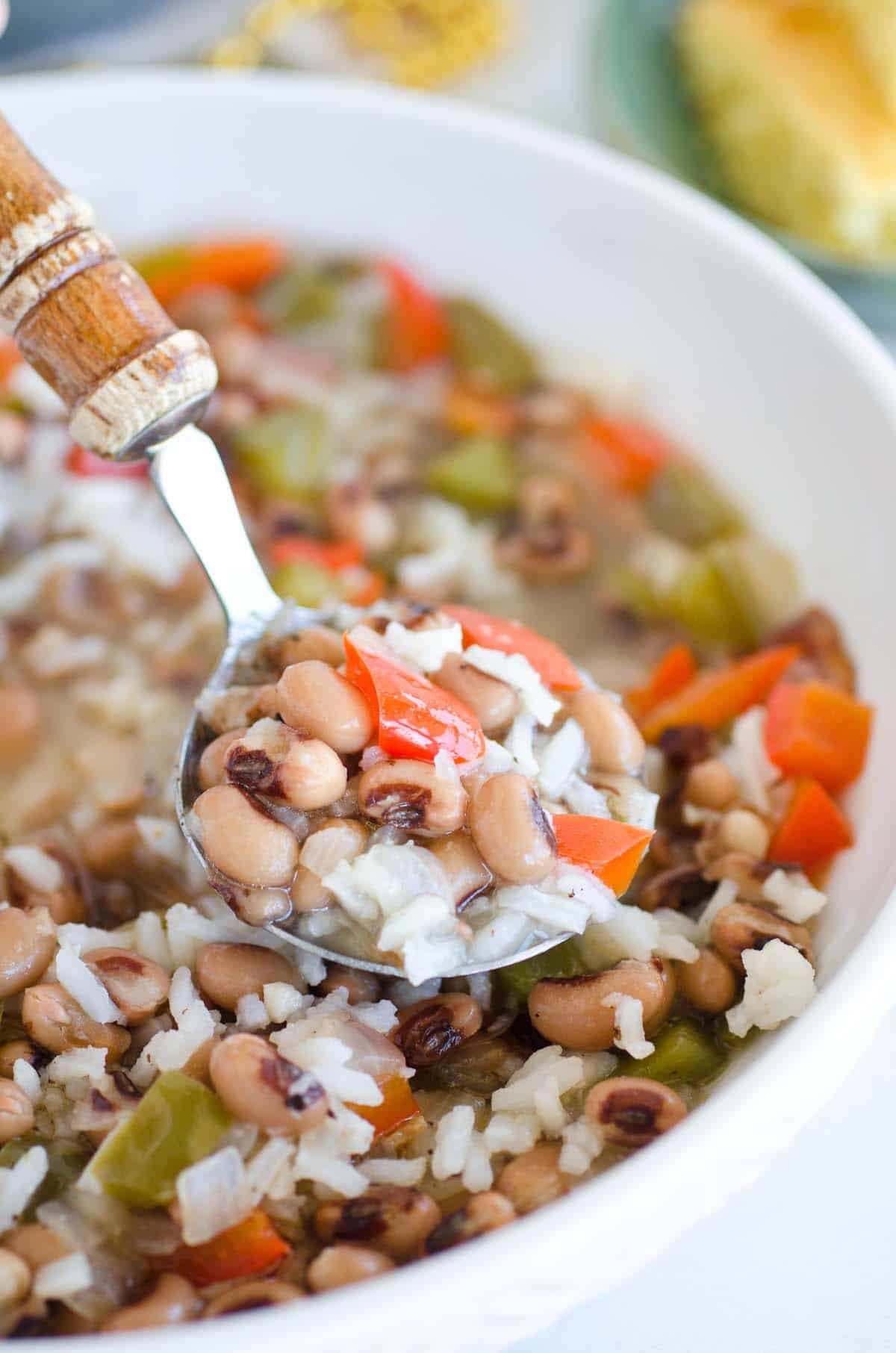 PRINT this recipe or PIN it to save for later. Made this recipe? Leave a star rating and tag me on Instagram @seededtable so I can see.  I love hearing from you! 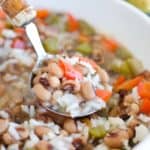