You are here: Home / Cuisine / American / Kumquat and Ricotta Crostini 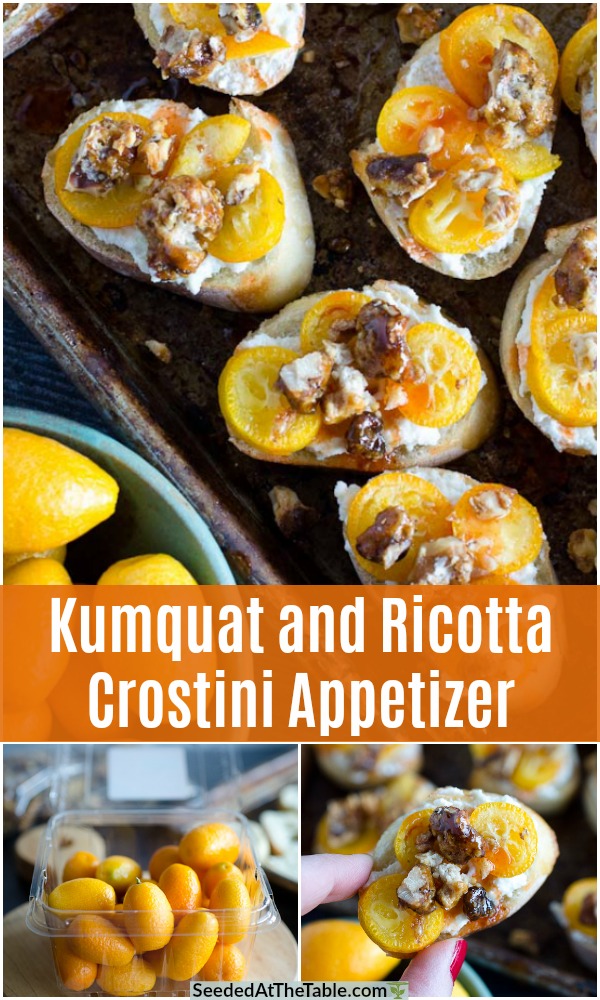 This Kumquat and Ricotta Crostini Recipe is a unique but easy finger food.  A kumquat is a small fruit that resembles an orange, but you eat the peel!  This appetizer may seem sophisticated but it is so simple and will easily impress your guests.

Click here to PIN this Kumquat and Ricotta Crostini Recipe!

Kumquat and Ricotta Crostini is an easy appetizer you can make within 15 minutes with only 6 ingredients.  Because you do not have to peel kumquat, you can quickly slice them for the perfect topping to your toasted crostini bread.  My recipe for kumquat crostini is adapted from The Fresh Market and is super easy.  It’s a fun easy finger food for any party! 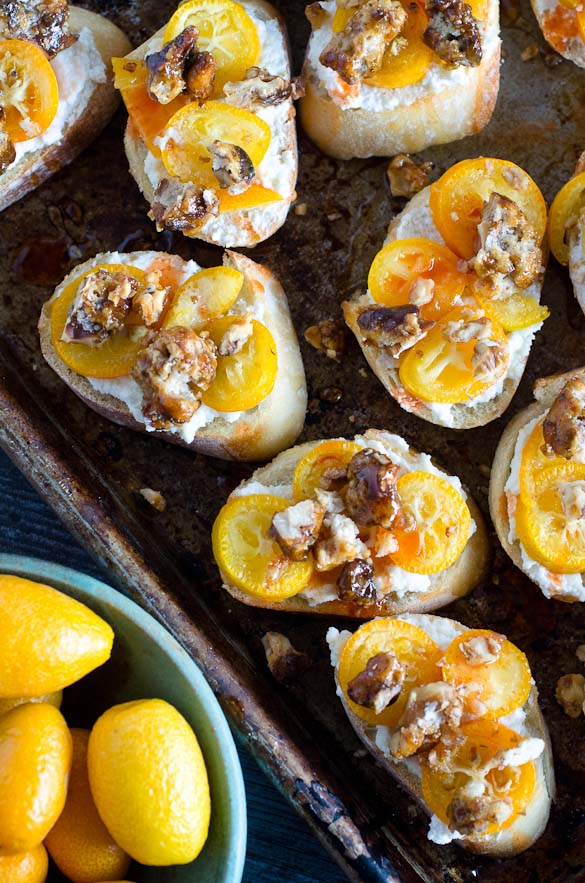 As an Amazon affiliate, I earn a small amount from qualifying purchases.

This crostini recipe comes together in less than 15 minutes.  Here are the ingredients you need: 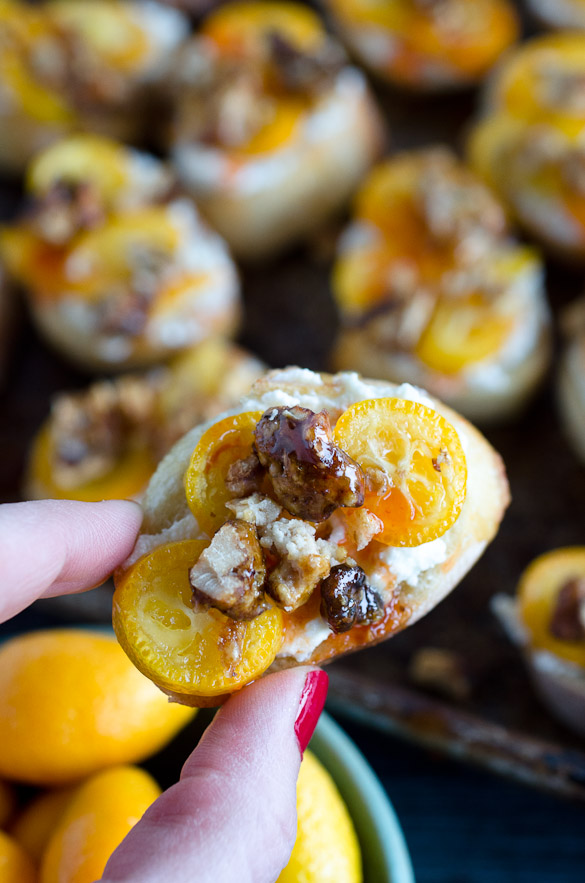 Remove seeds from kumquats — or don’t.  When slicing the kumquats, look for the seeds.  Some have them, some do not.  If you see them, remove them.  If not, no big deal!  The seeds from this citrus fruit are completely edible. 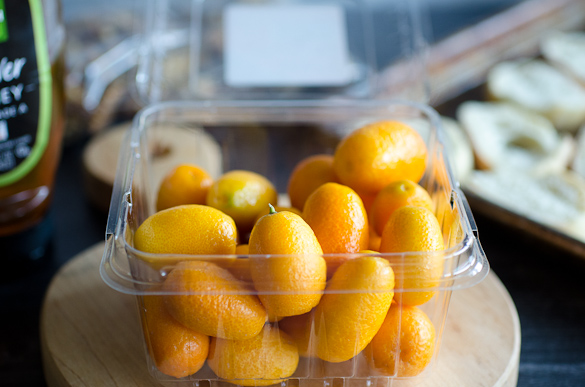 Other uses for kumquat.  Kumquat fruit can be eaten raw and whole, or sliced for salads or a topping like their used in this crostini recipe.  Kumquats are also cooked to make jellies, marmalades or other spreads.

It’s kumquat, not cumquat.  Ok, so who really cares about the spelling?  I don’t.  But, I thought it was funny that this spelling kept coming up when I was researching.

How to make Kumquat and Ricotta Crostini

Scroll down for the full recipe ingredients and instructions.

A kumquat tastes more sour than sweet.  The thick rind of the kumquat is sweet and the inside is tart.  A bit opposite of the larger orange that this small fruit resembles! 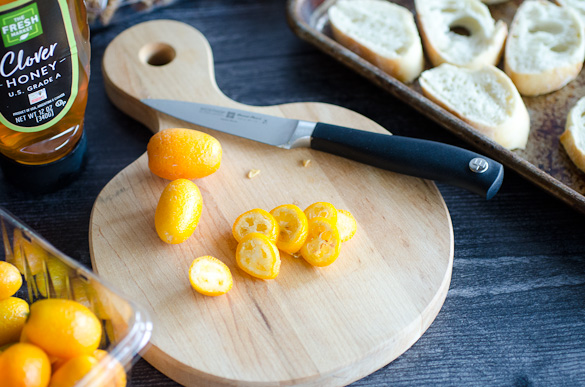 If you eat the kumquat whole, it will taste more tart because you’re getting all of the fruit juices at once.  When they are sliced for a topping, such as in this recipe, they won’t be so overwhelmingly sour because you’re eating it in small doses.  But, the sweetness from the honey really balances out the tartness well in this crostini recipe. 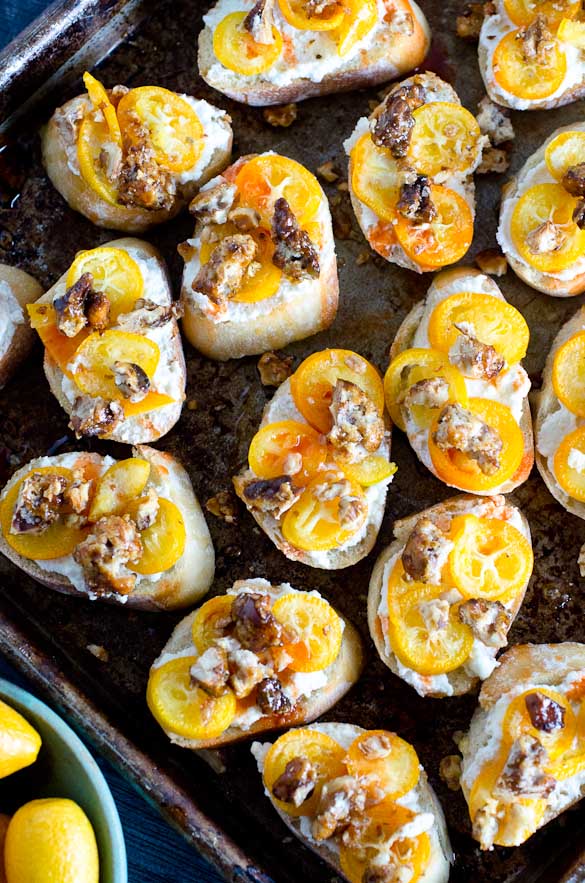 Since kumquat season is only November to March, you might want to make this during the off-season.  Or, maybe you don’t want it as spicy or sweet.  Try these recipe variations instead.

Substitute peeled mandarin oranges for kumquat.  You cannot eat the peels of the mandarin oranges, but you can quickly peel them and chop them into little bites for the citrusy flavor topping to this recipe.

More or less hot sauce.  Vary up the heat by using the amount of hot sauce you prefer!

Switch up the nuts.  You can use any kind of candied nut in this recipe.  I can predict candied pecans being ah-mazing here. 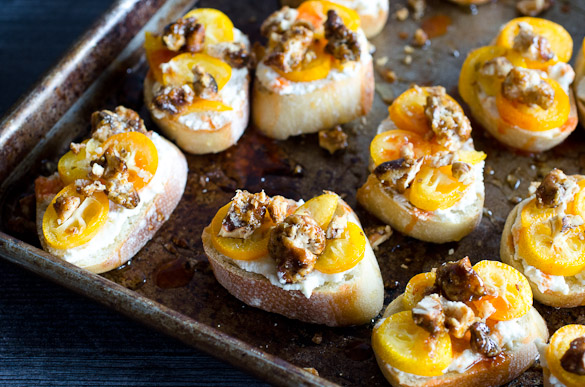 Printable recipe is below.  Leave a comment and star rating to let me know what you think!

This Kumquat and Ricotta Crostini Recipe is a unique but easy finger food.  A kumquat is a small fruit that resembles an orange, but you eat the peel!  This appetizer may seem sophisticated but it is so simple and will easily impress your guests.
Prep Time15 mins
Total Time15 mins
Course: Appetizer
Cuisine: American
Keyword: citrus fruit, crostini, cumquat, easy finger foods, ricotta, small fruit that resembles an orange
Servings: 10 servings
Calories: 221kcal

PIN this crostini recipe to save for later.

We’re the Gladd family!
Gather around as we experience joy and community at the table! END_OF_DOCUMENT_TOKEN_TO_BE_REPLACED