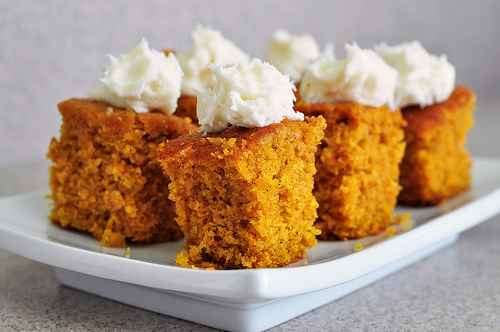 Ben asks for pumpkin bars all year round, but I never cave in to make them until the fall.  Much to Ben’s dismay, the rule in our house is that pumpkin-anything is for the fall season.  I like pumpkin things way too much to risk myself getting sick of it by enjoying it all year. See, by limiting it to a season it remains a novelty…a much anticipated taste.

Are you the same way?  What seasonal recipes do you break out only during certain parts of the year or maybe just for certain occasions?

Up until now, I’ve always made the pumpkin bars recipe from my Better Homes and Garden cook book.  Consequently, I decided I wanted to try something new and ended up absolutely loving this improved version.  These bars are thick and deliciously moist.  Even with the dollop of cream cheese frosting on top, they are suitable to serve as finger food. 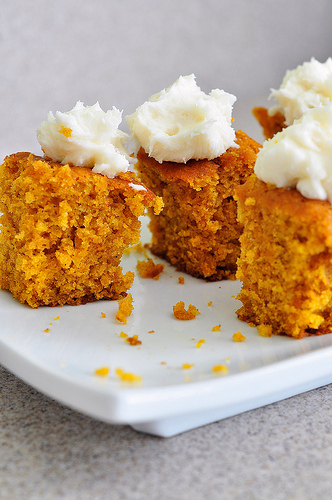 <Oops, one didn’t make it past the photo shoot.  But, my belly was much happier!>

I brought these to a cook-out with the pastors this weekend.  They were a hit.  And, no, they weren’t just a bunch of pastors trying to be nice (although, they are very nice, including my dear hubby).  They, and their wives, were licking their fingers, rubbing their bellies and smiling big…if that’s any indication of a genuine compliment.

Ben even mentioned that he really liked the presentation of these over the former.  How often does a man, at least MY man, comment on food presentation??  Hardly ever…never…zip…zilch…never…did I say that already?  🙂  Yes, we’ll be having these many times before fall is over.

In the bowl of a mixer fitted with the paddle attachment, combine the eggs, sugar, oil and pumpkin.  Mix on medium speed until light and fluffy.

Without over-mixing, gradually stir in the dry ingredients into the wet ingredients until just combined.  Pour into the prepared pan and spread evenly with a spatula.

Bake for 25 to 35 minutes or until it passes the toothpick test.  Let cool completely on a wire rack before frosting.

For the cream cheese frosting:

Clean out the mixing bowl and paddle attachment, then combine the cream cheese and butter.   Use the paddle attachment to mix on medium speed until smooth.  Turn the speed to low and stir in the sugar and vanilla.

Once the cake is cooled, cut into 20 bars and place on serving platter.  Use spoon, or piping bag, to dollop frosting on top of each bar.  Another option is to spread the frosting on the bars before cutting.

We’re the Gladd family!
Gather around as we experience joy and community at the table! END_OF_DOCUMENT_TOKEN_TO_BE_REPLACED